TWO BASILS FROM ONE FAULTY TOWER 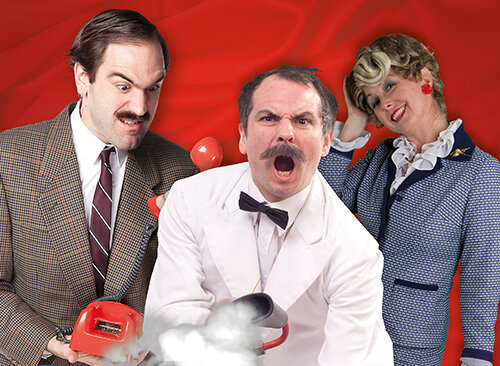 Try as you may to reach a consensus on what the best show is for a dinner theatre setting but how could the 1970s British sitcom Fawlty Towers not rank up their in the Top 10?   Add in elements of a mostly improvised foundation plus audience immersion and you have what can only be described as an instant box office hit.

Which is why our performance friends on the other side of the pond in London, England’s West End theatre district are celebrating its 10th anniversary of Faulty Towers The Original Dining Experience this month at the Radisson Blue Edwardian until December 31.

With two of the three rotating actors playing the part of Basil musing over the perfectly imperfect Innkeeper to ever reserve a spot in the hospitality business, it’s easy to see why snobbery has never been more fashionably funny.

Actors Jonothan Saunders (JS) and Jack Baldwin (JB) give playgoers more than enough reason to check-in for an extended stay.

What was your impression of the Fawlty Towers comedy when you first experienced the TV program?

JS: It was probably the first comedy I’d seen in which the central character was just awful. Awful and yet completely relatable. We all have moments of wanting to scream “RIGHT” and completely lose it, so it was wonderful to watch that take place without anything coming in to stop it.

JB: I can’t remember when I first saw them so suppose I must have been quite young. I loved the manic speed of it and how everything seemed to fall apart each time. I suppose for a lot of people in the UK Faulty Towers is a bit like The Beatles in that you grow up seeming to know every word without knowingly paying any attention.

What is the first adjective that pops into your head when you think about an Inn owner like Basil Fawlty that can’t keep himself out of trouble.

JS: Precious. He just can’t let things go. If he was only able to accept people as they are, or accept that his hotel was just alright, or average, then he’d be ok. But he can’t accept these things. He’s too precious, and so he goes to ever increasing lengths to make things the way they ought to be, with disastrous consequences.

JB: Handsome. What was the question?

What do find most rewarding playing such a misfit Innkeeper like Basil Fawlty.

JS: Being able to tell people exactly what you think of them. There’s a moment in our show where Basil completely loses it at the audience, and it’s a wonderful opportunity to lay down some truth on them.

JB: He’s the opposite of me (most of the time) so it’s quite nice to be rude. The best thing though is when the whole audience laughs, there’s no feeling like landing a joke perfectly.

What’s the hardest part about performing a lead role in a dinner theatre environment?

JS: The trolling. Audience members routinely attempt to get a rise out of Basil by deliberately trolling him. The problem with this is that most people aren’t very good at judging a moment of comedy. So they misplace it, a lot, in an attempt to be funny themselves. I sometimes wish I could say to people “Just relax. We got this. You’ve paid us to do this for you. Just let it happen.”

JB: Physically and vocally it’s very draining. There’s a lot of high impact voice work and action and he’s so combustible and highly wrung that there’s no down time. Across a week of shows it’s an effort to make sure each audience has the same level of commitment in the performances. It can be hard sometimes because so many people know the show so well that they either try to feed you quotations or make Basil lose his temper in the 1st minute.

Do you feel that we all have an ‘inner Basil’ that we have to keep at bay inside us?

JS: Absolutely we do, and we shouldn’t always keep him at bay. I think the most satisfying thing for the audience in seeing him lose it is that they see the moment of catharsis. And in their secret heart, they wish they could have that moment too.

JB: Letting off a little steam more regularly would have helped Basil to regulate his emotions

Of all Basil’s endless comical imperfections, when do you find yourself acting like the central character the most.

JS: When caught doing something by Sybil. It’s like a bolt of lightning goes through my body and stands me up on end, rigid, and petrified. It’s the element of the character that had always come most naturally.

The character, Manuel, never finds himself being treated with the dignity and respect he would from other employers.  Is this character employed in the wrong job or the wrong Inn?

JS: The wrong Inn, definitely. I strongly feel that Manuel is not stupid. He’s perfectly capable. He just doesn’t understand what Basil wants him to do. And Basil doesn’t have the patience to properly explain so Manuel gets half the picture and then gets it totally wrong. It isn’t Manuel’s fault at all.

JB: Probably more the latter. They treat him as though he’s an idiot but it’s Basil’s intemperance and linguistic ignorance that is the real problem.