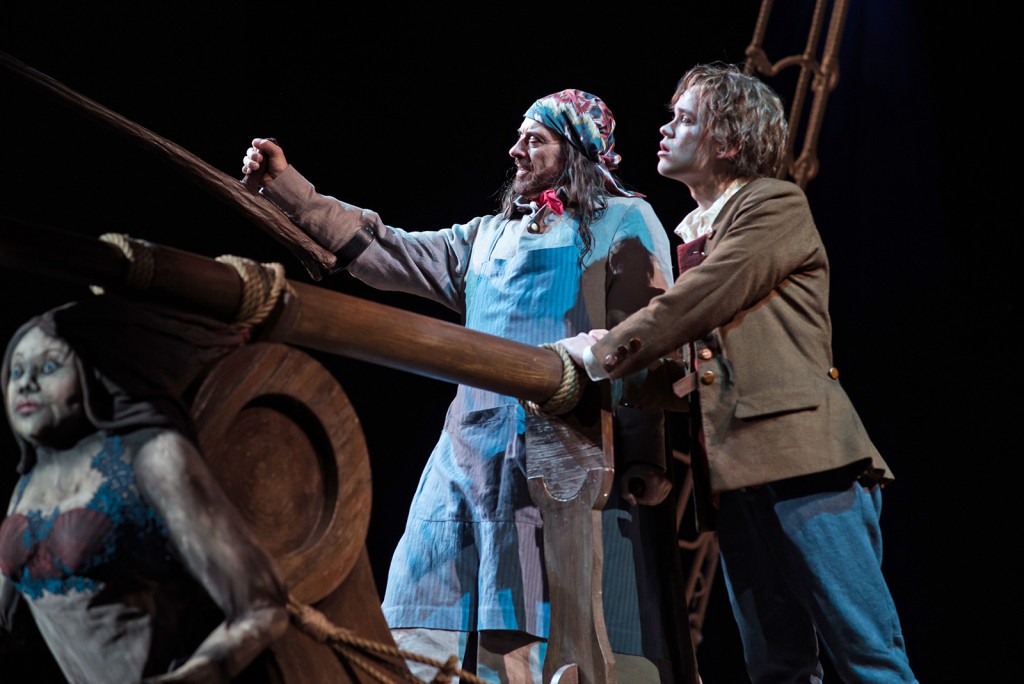 Juan Chioron as Long John Silver (left) is a ‘gentleman of fortune’ with Thomas Mitchell Barnet as Jim Harkins, the ‘last honest lad in the world’ by his side. The Stratford Festival production of Treasure Island plays the Avon Theatre until October 22, 2017.

Growing up too quickly is a total drag!

One day you’re getting scolded for not cleaning your bedroom, the next day you’re fending off bad guys in the adult world with no fair warning of the change that was about to come.  Can anything me more traumatic?

Jim Harkins (Thomas Mitchell Barnett) knows this feeling all too well in a family theatre event that lends itself to the idea that ‘treasure makes people behave in unpredictable ways.’  As the ‘last honest lad left in the world,’ he’s on mission that will outsmart marauders, take control of a ship, and enter into manhood.

With that said, the timing for the Schulich Children’s Plays / Stratford Festival adaptation is spot on in that young audiences are still familiar with the Pirates of the Caribbean franchise with more movies on the way.   The biggest challenge, of course, is how to but a novel adaptive spin on Robert Louis Stevenson’s beloved children’s story that’s been stylized in various film versions.

Despite the technical splendor, the production doesn’t quite capture the true elements of adventure and danger the way it could for maximum cross-generational appeal.   Both of which could be boosted through modestly deepened character design,  a handful of memorable lines, and a story surprise or two.

This one’s for the kids but that’s not at all to say Treasure Island should be confused with kid stuff.  Uplifting fun nonetheless.