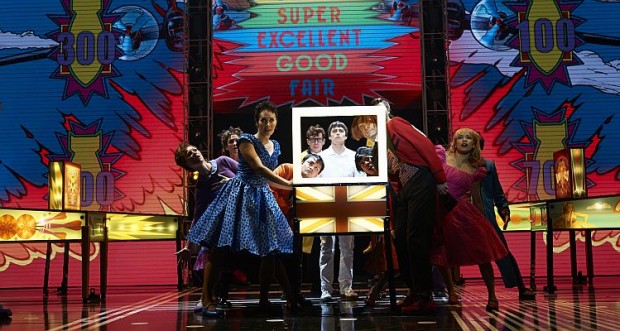 Fame and forgiveness are on the horizon for Robert Markus as Tommy (centre) with spunky ensemble members buffing the musical in all the far reaching places.

Anyone who has ever argued that dated rock operas trying to demonstrate relevance on the contemporary stage is a complete waste of time can officially book the penthouse suite at Hotel We Told You So. Director Des McAnuff’s return to the piece he wrote for the medium shows that a high tech magical spin on postmodern era themes is all that’s needed to captivate.

Tommy, without debate, is one of those rare theatre experiences illustrating the power of musical innovation when used as a backdrop to present day headlines such as sexual abuse and celebrity pitfalls.

Which is not mapped out exactly as the 1975 cinematic offering that wowed moviegoers but remains true to the journey of an autism struck ‘deaf, dumb, and blind kid’ who sure plays a mean pinball. Told almost entirely through song, the production at times feels like a stadium rock concert with visual highs planted throughout the show.

If Robert Markus (Tommy) is the rock of the show, Jeremy Kushier (Captain Walker) is definitely the roll. The male lead is responsible for the production’s good vibrations while the father figure ensures lasting sensations reminiscent to his contributions in theToronto staging of Jersey Boys.

There’s not a single gutter ball moment to be found with the only real threat to tilting this musical game is a tight budget lack of prep time getting Tommy to opening night. Neither were remote risks facing the Stratford Festival thereby ensuring that audiences observe the vivid inner child healing process through such songs as ‘See Me, Feel Me’ and “I’m Free.’