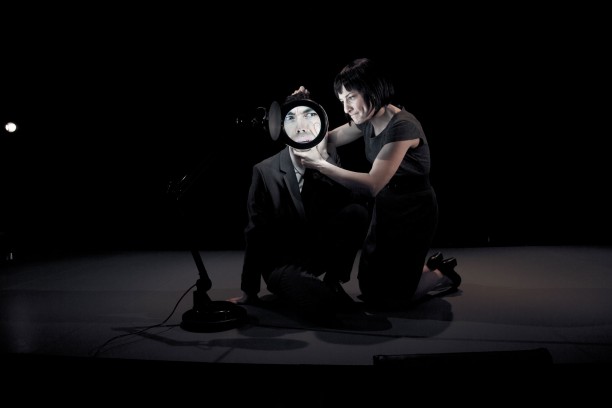 Black comedy is back with a vengeance via The Ugly One in the Tarragon Theatre Extraspace. Jesse Aaron Dwyre as Karlmann (left) and Naomi Wright as Fanny (right) prove that sometimes you need to look at a subject closely to find the funny.

Some text to go here

In a world of million dollar smiles, everyone tells you when you got what it takes but no one dares to breathe a word when you don’t. German playwright Marius von Mayenburg swims against the reality tide with an anti-subtle, über-absurd offering that draws the conclusion if one person can draw closer to facial perfection, the rest of us want in on the action too!

One’s heart goes out unconditionally to engineer Lette (David Jansen) who experiences a career high for patenting a revolutionary high voltage plug but is offensively not selected by the company boss to unveil the device at an industry conference.

Instead, Lette’s assistant Karlmann (Jesse Aaron Dwyre) gets the nod with a conflicted inventor demanding answers. ‘Your face is unacceptable…you can’t sell anything with that face,’ asserts Scheffler (Hardee T. Lineham).

In utter disbelief of these claims, he approaches his wife for comfort but reassurance is not found at home either. “You are ugly, that’s a fact,’ confesses Fanny (Naomi Wright) unable to stomach direct eye contact with her grotesque partner when addressing the issue.

Successful cosmetic surgery turns Lette into an overnight sex symbol. Women become unbearably easy, company sales skyrocket and the only thing that can jeopardize the newfound good life is a bit of physical feature competition but, c’mon, what are the odds of that happening?

A composite of hilarious satire and daunting identity crisis, The Ugly One ushers in a new era of theatre without borders as director Ashlie Corcoran drives the story vehicle beyond conventional speed limits comparable to an extended Monty Python movie scene.

Andy Warhol might have been bang on when surmising that everyone’s famous for fifteen minutes. Theatre Smash goes one step beyond with this belief in true maniacal style.