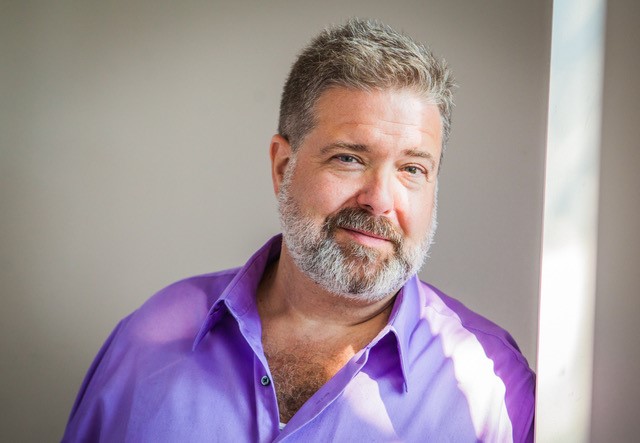 In a previous century, Benjamin Franklin once said that nothing is certain except death and taxes. If the respected statesman were around today, he’d likely add a third certainty to this belief and that’s Bruce Dow’s return to the stage.

The Seattle born and Canadian raised artist has performed in hundreds of plays since being bit by the acting bug and with taking another step forward teaching classrooms of next generation actors how to master the craft, it’s easy to see why his career has taken him to Broadway and back.

Maybe that’s why the godlike genius speaks so assertively about acting and the fundamentals of wowing an audience.

His role of Paul Burrell, the former footman for Queen Elizabeth in Diana the Musical, written my the Tony Award writing team behind Memphis, is a clear example of this before theatre lowered the curtain at the onset of a global pandemic. The show reopens in November with playgoers already feeling the buzz.

Acting 101 dictates you don’t get into the business for fortune or fame. The artist known as Bruce the Almighty in some circles proves has proven this time and again as he reflects on the inner working the craft and his indelible experience working with the iconic Christopher Plummer.


What fascinates you most about the acting craft?

Acting changes with you and you must change with it.

I always tell me students: “The day you think you have decided on ‘your process’ is the day your work dies.”

And the artist changes too. We age, our needs and focus change, what interests and fulfills us changes. What we can physically, mentally, and emotionally do changes — it broadens vastly in unexpected areas, and disturbingly diminishes in others.

If the theatre is a temple in which we explore the human condition, it is our human condition and the ever-changing condition of our art that keeps us pertinent and the work interesting.

Acting well is being continually reminded that you know nothing and that you don’t fundamentally belong—and that can be amazingly exciting!  Only IF you are willing to live in and explore that tension.

Is acting an art that anyone can succeed at with training or are there natural traits one must possess to excel in this discipline?

When the acting is about the actor, then it’s poop.

The best acting comes from a lack of self and an expansive empathy for the experiences of others.

Unfortunately, the industry draws those in search of attention for themselves. The cult of personality and the self-reflective actor can only go so far for so long before the work implodes—and the self with it.

This is not to say that the actor must be self-less or lack self-awareness or self-knowledge — rather — the opposite.

But the work itself is never about the actor.

Marlon Brando once stated that acting is the expression of a “neurotic impulse.” Do you believe this is true?

An understanding of basic psychology, and what makes a person “tick” is imperative for acting.

We are all neurotic to varying degrees, and as actors we must reflect the mental and emotional state of our character.

As actors, I feel we have historically placed far too much emphasis on “emotion’ and the validity of our “personal experience.” I am guilty as charged in that category.  I’ve exercised my own need and neurotic impulses on many a stage.

As I’ve matured, I now see that “emotion/neurotic impulses” can only occur once everything else in the scene is happening.  They are resultants, the are not actions.

I think we need to grow past Mr. Brando.

What steps do you take to fully understand the importance of your character in a story?

I’m a freak for structure. It’s what it’s all about!

We have to know what our author is talking about — what is the author’s thesis statement for the piece — usually found in the inciting incident — only then can we see how our character is used by the author to facilitate and support their argument.

Playing a character should never be about playing “personality traits” for their own sake.  That, for me, is where most acting goes awry.  We want to play the “lost soul,” the “villain with a heart of gold” — the emotion, the stereotypes.

Ophelia in Shakespeare’s Hamlet for example isn’t being neurotic for her own sake.  She is doing so because her father is hiding behind the curtain and has put her out as bait. Hamlet has to stab the curtain because Ophelia’s behaviour draws his attention to her father’s presence.

And that the play can’t move forward until the action happens.  The action doesn’t happen because of neurotic behaviour, it happens because of a previous action.

What techniques do you rely on between shows to keep your skills sharp?

It’s easy to practice what we are good at but it doesn’t serve for growth. I force myself to practice whatever I am least comfortable with.  I’m not always successful but that’s where my focus is now.

Most valuable to my craft as an actor is all the non-actor interests that I have. Being an actor 24/7 is staggeringly toxic and dangerous.

I see my students so intent on attempting this so I encourage them to find a non-theatre related hobby.  Something outside art, music, dance, literature.

We are supposed to portray the human experience. How can we if we have only experienced the “actor experience?”  If we only look inward, there can be no contextual human growth.

You can’t play a human until you’ve been a human.

Get a hobby.  Live your life.  Don’t act your way through it.  It’s a hard lesson to learn.

Do you have a rehearsal process that’s tried, tested and true?

Each experience is different.

Sometimes I show up cold — and see where it goes — and sometimes it works. I like this way, in theory, because it allows everyone to move forward together.  We can develop the play and the performances based on the text and the leadership of our director and designers. But rehearsals are so short, and this approach can sometimes bite you in the butt!

So I generally prepare somewhat.  Do my structural analysis of the play, that stuff. I try to read parts of the play other than my own.

There is a great danger—and I’ve seen it too often—when an actor rehearses alone and shows up not to rehearse but to “give their performance.”

I’ve worked a couple of environments that fed that kind of thinking—where very few people actually rehearsed during rehearsals.  They would come in prepared, scope out the production, then go home to rehearse and come in the next day to “give their Lear.”

It makes for staggeringly self-indulgent and boring work to watch.

What are some best practices to help you memorize your character’s lines?

I knew an actor who would remember his lines word by word by word.  The problem with that was that when he lost one word, he lost the whole play.

I have to base learning my lines on A) What am I doing in the moment?  B) What has changed from the last moment? C) what words do I need to use to get the result I want? And D) What are my peculiarities of speech (how does my character say things).

Memorization is an ever-changing approach. Don’t get locked into a process you think you like.  It won’t serve you in the long run.

What kind of challenging roles do you like to sink your teeth into?

The only roles I find challenging are the “easy ones.”  When a role seems self-evident, it is usually as sign that I’ve misunderstood both the play and the role — and then I have no ideas, become lost, confused, and do crap work.

Other roles are deceptive in what they present.

Being able to differentiate these two kinds of writing is key.

If the piece is well known we have to ask ourselves a different set of questions: What does the audience expect from this character/this moment? How can I allow the audience an honest experience of this moment which defies their expectation — thereby allowing them to experience it “anew,” yet not in conflict with the intentions of the play.

If we show an audience merely what they are expecting we are doing them a disservice as it lets them off the hook. They don’t really get to experience it.

Tell me about a role that you played where something went horribly/laughably wrong on stage but you/cast covered up the best you could.

I do remember a production of The Importance of Being Earnest, in which our Gwendoline had the worst stomach flu, and there was no understudy.  She would glance off-stage, as if being spoken to by an unseen character, walk off, and violently wretch in the wings.

We could all hear the vomit hitting the inside of the small tin bucket provided by stage management.

The rest of us kept going and said her lines for her if needed.

You had the luxury of working with the late, great Christopher Plummer. How do you describe that experience?

Some people thought Chris had a reputation for being difficult.  I only saw him lose his temper when someone else wasn’t doing their job.  It was never personal.  He was ready to work and they weren’t. He would let them know and then move on with no recriminations or hard feelings.

Chris was playing Prospero in The Tempest at the Stratford Festival. I was playing Trinculo. We had no scenes together but we hung out a fair bit.

As a person, who was also a huge star, Chris was a very real person. He was an aging man who arrived at the theatre 2 hrs before the performance, dressed, did his make-up, and walked around backstage until he had seemingly shed about 20 years, emerging a new, more youthful man. He was funny, and charming, adorable, and totally no bullshit.

I once hosted an evening in his honour, and I tried to describe to the audience how “weird” Chris’s choices were as an actor. They were never what you would expect from either the character or the scene. And yet, they were always staggeringly accurate and real!

Chris was never afraid to allow for the complexities of humanity or the unpleasantries of human frailty. He never gave a ‘nice’ performance.  He always gave ‘great’ performances.

That you can’t make a living at it, and you won’t be a star.

You need to find a reason to be in this business that is not about self-validation.

I’ve had more chances than most.  I know many of those were due to privilege and many were due to talent and effort. And a lot of luck.

But if you want to be a star — do something else.

There’s a lot to be said about opening night jitters. Is this inescapable?

I never used to have stage fright.  And with certain performances, I still don’t.

With other performances, I have vomited before the show and at intermission — some of that was due to what I expected from myself, some from the pressures others had placed on me.

In general, I have developed a larger stage fright than I have ever imagined.

My best advice—don’t fight it. Accept it.  Say out loud, “I am terrified” and it loses some of its grip.