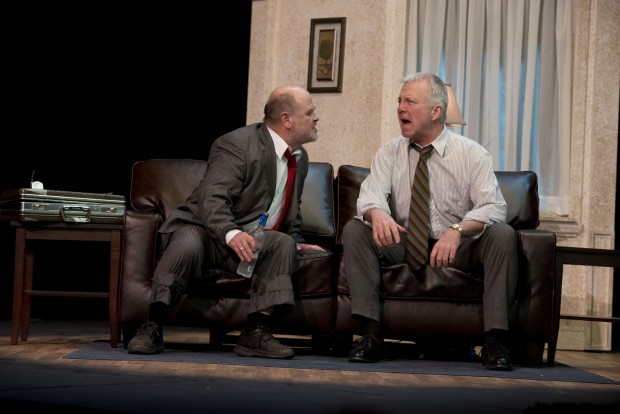 Friends in strange places: Bruce Gooch as Oscar (right) defends his position on a key issue when William Vickers as Parnell (left) points out his prevalent hypocrisy. The Lyndesfarne Theatre Projects presentation of ‘The Ravine’ on stage until April 13.

Everyone wants something from Oscar Wallace (Bruce Gooch). His ex-wife (Karen Wood) wants revenge. A skip tracer (Wes Berger wants his money, a speech writer (Sarah Murphy-Dyson) wants his power and a reformed arsonist (William Vickers) wants his life. And when a political platform sells the promise “If I’m elected, there will be no more government,’ get ready for a few surprises before election day.

While taxpayers have become painfully familiar with politicians behaving badly as of late, George F. Walker’s wild and unapologetic dramatic comedy campaigns on the idea that none of us can escape our past. This tale of true colours and zero subtleties speaks to a disenfranchised story loving generation seeking edgy entertainment without a pervasive message.
At least that’s the impression one gets from his waxing clever plot exercise that attempts to separate the social monster from the political problem solver when a man who disappears for 25 years surfaces in the race for Mayor.

In short, theatre for common people has never felt like so much fun in a search for truth.
Karen Wood holds steady as Michele, a psychiatric nurse who demands accountability as Bruce Gooch pleasantly roams the moral low ground in Oscar’s pursuit of electoral victory. Juggling this kind of street smart dialogue may appear easy but the remaining cast relies on impressive mental muscle to ensure character prompting or risk the emotionally heavy text sounding spurious.

If sleepy Niagara needs a wake-up call that a modern staging need not be so neat and tidy, The Ravine is a bona fide game changer. Vulgarity phobes will find some of the language trenches squeamish but in a harsh landscape of wheeling and dealing, it would be wrong to expect anything less.