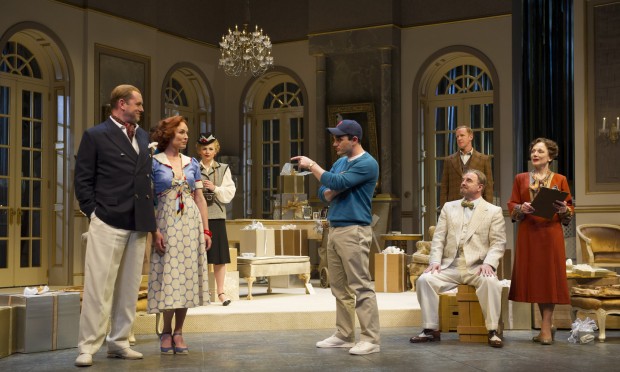 Moya O’Connell as Tracey Lord (centre) has a new man in her life with Thom Marriott as George (left) all smiles about his bright future. A casually dressed Gray Powell as C.K. Dexter Haven (right) comes around to make sure everyone believes in the decisions that are about to be made.

Cute Plotline With A Message

The irony surrounding the privileged is that they have it so much easier than the rest of us. But when you look more closely at the central characters of J.M. Barrie’s The Philadelphia Story, being given a magnificent revival at the Shaw Festival, you’ll see they’re not immune to their own problems some of which tower over our own.

Tracy Lord is a young socialite about to be married (for the second time) and she is haughtily looking over her wedding gifts with her mother and young sister Dinah. As the family gathers for the wedding, her ex-husband shows up, too. We learn she doesn’t want her father to attend as he is having an affair with a young Broadway starlet. Tracy’s brother Sandy comes up with a scheme to invite a pair of reporters to cover the wedding: their presence is granted in exchange for keeping their father’s indiscretions out of the news.

As the pre-wedding day goes on, Tracy’s fiancé, the stuffy George Kittredge isn’t so interesting. Soon she has two more suitors – her ex, Dexter, and the reporter Macaulay (Mike) Connor. Which does she marry?

While all this sounds like a cute little plotline, there are other messages: it’s a glimpse into the snobby world of the rich one-percent and the class system they perpetuate. It’s also a look into a high society family and their relationships.

Moya O’Connell is excellent as the snobby young woman. Her role is large and she carries it well. Her disdain for her ex soon slips away when he presents her with a model sailboat as a wedding gift. O’Connell handles Tracy’s transformation well, as she loosens her grip on the upper class, and takes a more realistic view of the world.

Tess Benger as the kid sister is suitably cheeky and mischievous. She provides a humorous look at the adult world through a young teenager’s eyes.

The two suitors Gray Powell as the ex-husband Dexter and Patrick McManus as the reporter Mike are both very charming, and make themselves likeable, giving the plot its twist. The Lord family including Jeff Meadows as brother Sandy, Sharry Flett as the mother and Juan Chioran as the father are all excellent.

Life is for living regardless of the happy endings shortage that prevails. The Philadelphia Story makes it clear that not one of us is worthy of a smaller share.