THE MADNESS OF GEORGE III 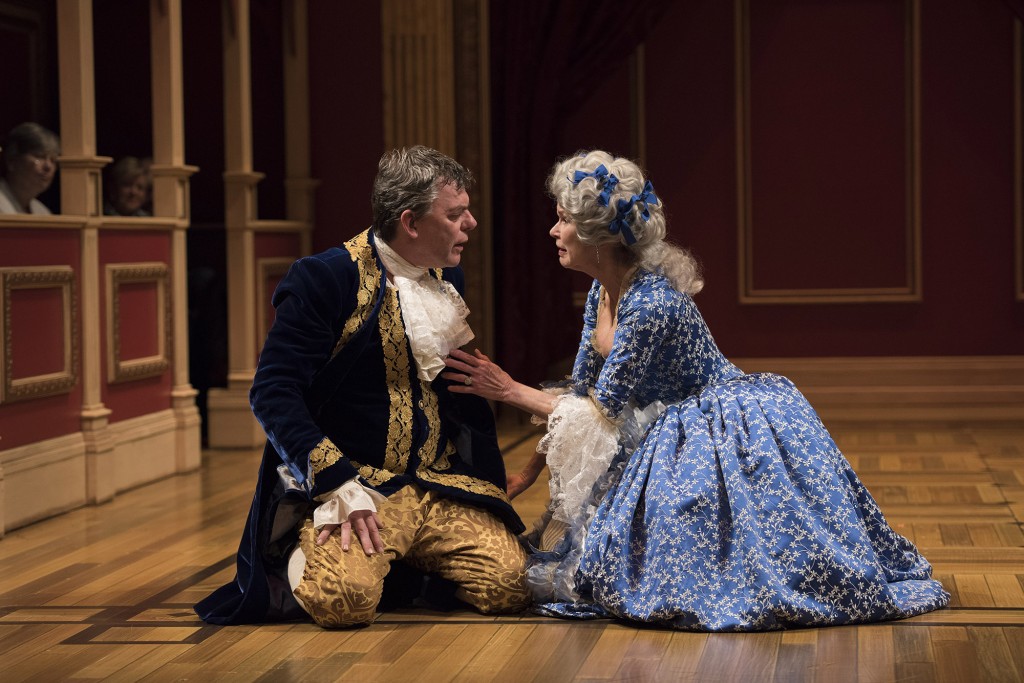 Mental illness is by no means a laughing matter although amusement proves to be the best remedy in the Shaw Festival’s polished presentation of The Madness of George III. Tom McCamus in the role of King George (left) and Chick Reid as Queen Charlotte (right) give ceremonious performances.

We’re not talking about the hey-you-kids-get-off-my-lawn kind of restlessness but rather the ensuing memory loss and sometimes quick tempered reactions to trivial events as life’s dead end sign looms on the road in the very near distance.

But when you’re an 18th century monarch, you can get away with almost anything, right?

Not so in Alan Bennett’s fictionalized biography The Madness of George III where His Majesty is not himself and an ailing King means an ailing government.  Those that surround the figurehead have more than their hands full with erratic behaviour that is daunting to diagnose and impossible to assign treatment for.

A dramatically magnetic offering bursting with comical episodes, the Shaw Festival production embraces a new concept of two-way theatre that plots several playgoers on the stage with ensemble members.  In a play where everything is a bit off kilter anyway, director Kevin Bennett’s strategy works surprisingly well.

‘Something’s not right, why is this happening to me?’ weeps theatre’s greatest asset Tom McCamus as the discombobulated George III.  And when he lashes out ‘I’m not going out of my mind! My mind is going out of me,’ only then do playgoers sense the true gravity of this portrait of a declining state of mind.

A powerfully moving presentation like this strikes a delicate balance between enriched tragedy while drawing ceaseless compassion for frailty of the human condition.

If you’re captivated by storylines that examine the disconnection between outward appearances and inward emotion, The Madness of King George III is just what the theatre doctor has ordered.