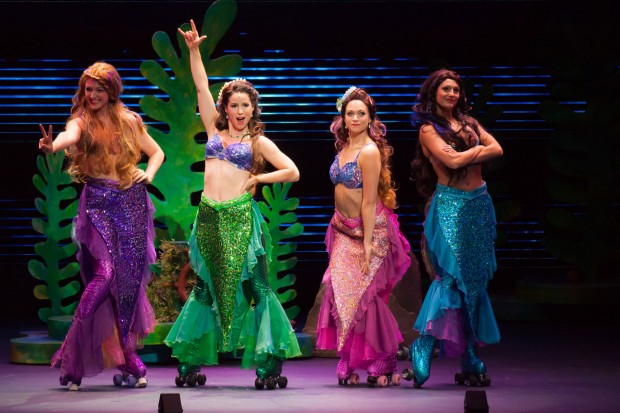 With the calendar down to just one page, Ross Petty’s funtastical folly is back to spread its holiday warmth. Yet it only takes a few scenes to realize that The Little Mermaid is shaking things up this season with themes of social responsibility amid the story framework of a fish out of water blonde that surfaces for positive change.

The real eye opener is that Reid Janisse’s rewrite veers away from the traditional narrative more so than previous company offerings. This is, after all, a city undergoing communal stress with an airport, proposed casino and wall to wall condominium projects which all find welcomed reference points in the script.

But the giggle traps are plentiful, the performances untouchable, and despite 2013 being a wonky year for borrowing mainstream chart toppers to accent the show, the selected songs serve surprisingly well for kidlets and tweens.

Chilina Kennedy proves to be a perfect catch as Angel, the harbour heroine who sets out to stop an entertainment facility from being developed on aquatic turf with Marc Devigne establishing a delightful vocal balancing act in the role of Adam, an environmental protestor with the best intentions to save the day and win the girl.

There’s no denying Dan Chameroy’s highly amusing contributions that truly serve as the presentation’s comical hook. Not only is the Auntie Plumbum character an outrageously wild story insert but when it comes time for the performer to sing ‘Be Careful What You Ask For’ it’s easy to see why the Stratford Festival refuses to let him slip away during the summer months.

And Ross Petty not wearing a dress this year is about as panto tide turning as it gets. Pogogo’s pernicious ways triggers the expected jeers from playgoers but really, is nothing sacred this Yuletide?

Maybe it is time to rightfully evolve the annual holiday tradition at the Elgin Theatre when 18 years of family entertainment tradition requires the charting of musical theatre territory.

If not, you can bet that Camp Petty will be back at the planning table in due time surprise us again next year.