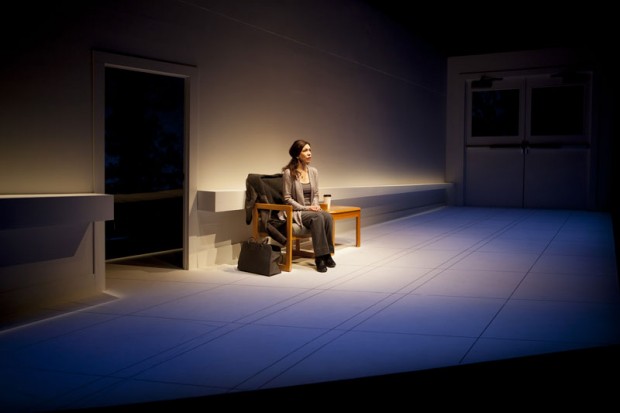 A bedside visit in a final farewell gesture to a mother can unleash a swell of poignant memories. Allegra Fulton stars as The Woman in the English language premiere of ‘The Carousel’ at the Berkeley Street Theatre until March 30.

Sequels. They can suck like there’s no tomorrow. Why do storytellers even bother when trigger tales are routinely watered down versions of the original and character motivation is inherently contrived the second time around? Jennifer Tremblay may have earned herself the title of Empress of Narrative Continuation with a follow-up that delivers far more than it promises.
That’s because the pathos one can extend to lives less ordinary requires a high design solo piece that would otherwise rely on a cast of five to hit the finish line. And when the theatre creation nexus draws an audience into a world of which it’s far removed, the last thing a staging can risk is spinning round and round in circles.
Megan Follows leads with heart and instinct in a technically robust presentation that serves the Nightwood Theatre brand remarkably well. The actor turned director is highly familiar with the story propulsion techniques available to her and smartly arranges each scene of the episodically heavy recount vehicle.
And it’s not as if Allegra Fulton didn’t don the face of live performance purity in 2010s The List. Yet her return to the compassionate play foundation demonstrates her impeccable strength in manifesting the full gamut of emotions in morphing from offspring to mother to grandmother and beyond.
Theatre newbies no doubt have challenges following scenes due to the set and cast limitations requiring advanced concentration. A little effort, however, goes a long way in The Carousel’s ceremonious extrication.
Few will ever argue that a woman’s work is ever done. While sometimes it takes a longer amount of time for a story to say goodbye the right way, Quebec dramatists like Jennifer Tremblay makes each step getting there an indelible experience.