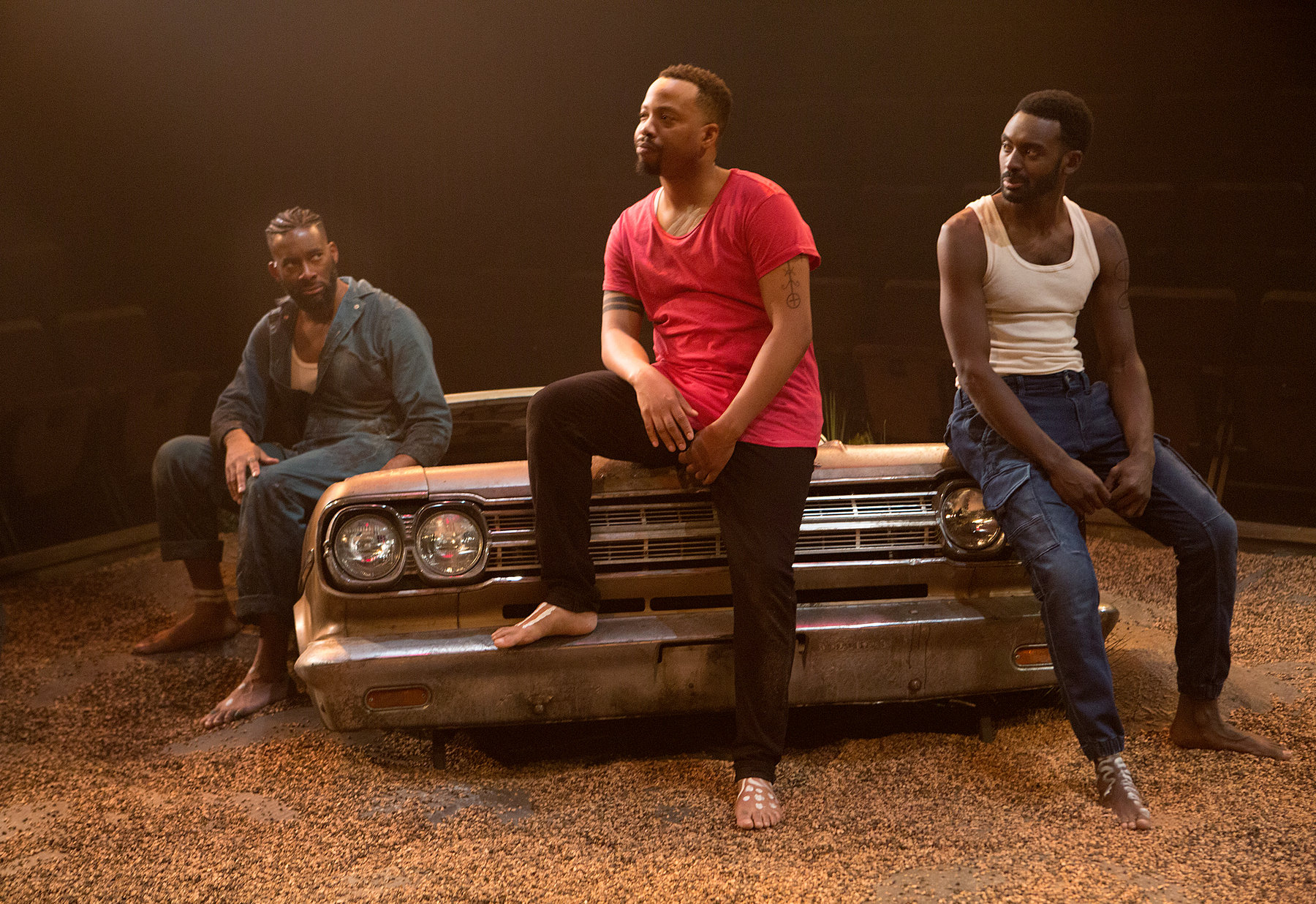 A dozen tires and a submerged vehicle doesn’t sound like the coziest setting for a special sort of homecoming.  Yet seeing is believing a physically fuelled The Brothers Size, on stage now until May 26 at the Young Centre.

ONE SIZE DOES FIT ALL

‘The road is rough…and hard,’ states the Car King in the opening scene of the 90-minute three hander about the difficult journies less travelled for most of us.

And if you’re three young black men in Louisiana’s bayou, you just know there are a few more hills, stones, and bends in the distance than you can ever possibly avoid.

Playwright Alvin McCraney’s twenty year old play captures it all in this sibling’s keeper storyline that harnesses African Yoruba mythology that’s funny, tender, and socially provocative.   Worry not about instantly connecting with the trio of surviving souls in the first half of semi self-narrated juncture, by the second half you’ll feel right at home with this lot.

Darren A. Herbert’s Ogun is the cruise control mechanism The Brothers Size where the focused and disciplined elder puts his fresh out of prison kin to work for a better tomorrow.

Conflict ensues when Mazin Elsadi’s Oshoosi demands he not be treated like he’s locked up due to his brethren’s authoritarian style oversight when all he wants to do is taste his newfound freedom with Marcel Stewart’s Elegba who is also no stranger to incarceration.

Set aside cultural nuances of finding one’s rightful place in a world offering little comfort for the disadvantage, this dynamic drama speaks to owning the mistakes of the past and limitless efforts of helping those we love most.  One size does fit all here.

Audiences take a deep breathe in a defining moment when Elegba arrives in the early morning to break the news to Agun that the police are in hot pursuit once again.   The elder family member remains silent with these words and it’s unimaginable what’s truly playing out in his head.

Despite this, you’re going to love the uplifting song scene where blood undoubtedly proves to be thicker than water. It’s the signature smile maker of the show and every bit spiritually renewing.

The Brothers Size and its mature themes is a distinctly different play for Soulpepper Theatre, perhaps one that signals long awaited change for the Distillery arts organization.  Running deep with emotion and high on redemption, this event hits the mark of magnificence.