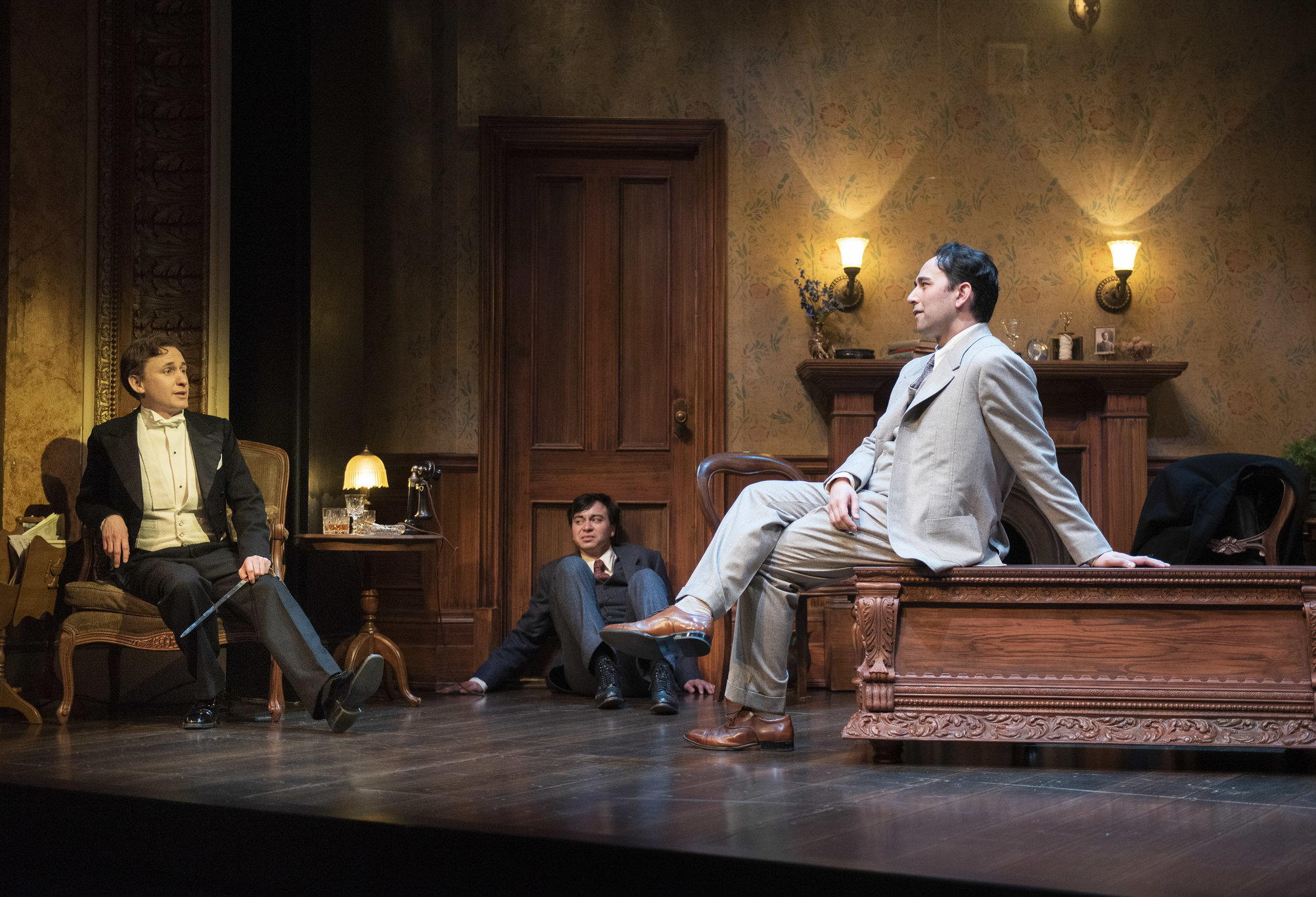 Kelly Wong as Wyndom (right) plays down the elephant in the room with Travis Seetoo as Charles (centre) finding it easier to keep a tight lip on matters. Michael Therriault as Rupert (left) suspects things just aren’t adding up in the Shaw Festival’s superbly calculated presentation of Rope on stage until October 12, 2019.

It goes without saying that few people can get away with dong bad things, the rest of us pay in spades for our own dirty deeds so don’t do it no matter how tempting it is.

That’s the take away from playwright Bernard Shaw’s outlandishly entertaining murder non-mystery that validates the old adage ‘Give ‘em enough rope, and they’ll hang themselves.’ This isn’t a whodunit sequence of events, it’s a thrilling and fantastically mapped out will they get away with it dramatization.

Which is so true in the case of a calm, cool, and collected duo aching to catch a late train out of town as soon as their arriving guests say goodnight giving them an air tight alibi they desperately need to pull of the unthinkable.

Red flags go up when food is served on a rather nice locked chest in the centre of the room rather than a traditional table. Despite cheerfull curiosity as to what’s inside, it’s not as if there are ‘rotting bones’ tucked away.

However, answers don’t seem to add up and suspicion is rising.

Kelly Wong and Travis Seetoo are magnificent malfeasances in their respective roles that you strangely cheer because the characters are just so darn likable.

But it’s all eyes on Michael Therriault’s man of many critical questions, Rupert, that demonstrates extreme patience weighing the facts. You may have seen him before in a variety of intriguing roles but never before quite like this.

From a lightless sets for the first 10 minutes of the show to smart silhouettes behind screens, director Tanja Jacobs frames the ‘complete story of the perfect crime’ in such a way that adventure seeking and danger loving audiences are barely pre-occupied by the potential story outcome when there’s so much to sit back and enjoy with the unknowns.

Rope is so criminally good we should all be on probation for simply smiling throughout the scandalous behaviour that unfolds. Probability factors aside, it might be best to do a Google search for a defense lawyer just in case.