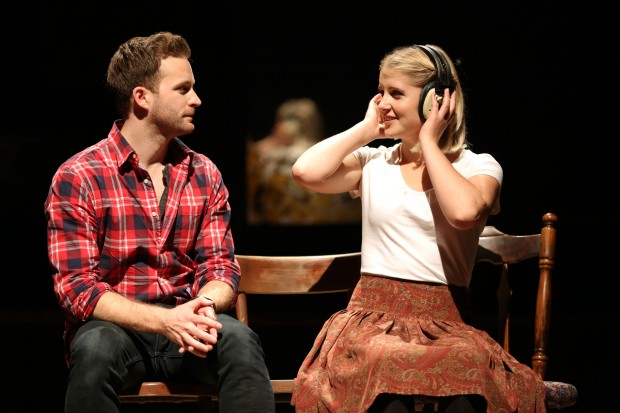 Stuart Ward and Dani De Waal star in ‘Once’. Cute, comical and courageous, this musical of striking musical is definitely not your average boy meets girl story.

Anthems Of The Heart

In a disjointed landscape of broken dreams and mending hearts, how often is it that we feel like giving up on all that we do and everything believe in?  Until pharmaceutical companies produce a pill to medicate this kind of reaction the population is reliant music makers Glen Hansard and Marketa Irglova to take a deeply moving story like Once to remind us that someone, somewhere has the motivating compulsion to bring us back to life.

Edna Walsh’s touching tale illustrates the importance of community where people with similar values and practices congregate in small circles for a greater good.   And when everyone serves a critical need to assist others, never do any of us find ourselves having to go it alone.

Set in Dublin Ireland, the musical introduces two nameless characters known only as Guy (Stuart Ward) and Gal (Dani De Waal) who share a passion for strings and keys.  Their less than picture perfect lives have his former girlfriend starting a new life in America and her present husband continuing an existence in the Czech Republic.

Soon they discover ‘to live you have to love’ although neither seems to be an option at this particular point in time.  That is until a recording session brings together a group of colourful instrumentalists to coagulate sounds and emotions into powerfully persuasive anthems of the heart.

With romantically rich lyrics imbedded in ballads to die for, this is one of the most inviting story and song vehicles over the past 25 years capable of winning over any musical squirmer.  Director John Tiffany’s sharp sense of stylistic movement innovation makes Once a show that has to be seen twice.