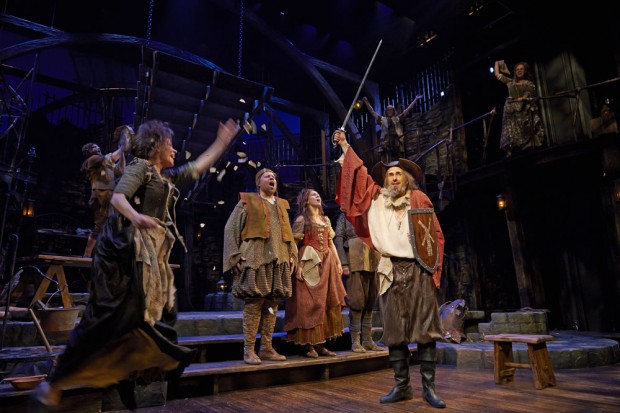 Tom Rooney is a man of many faces in the triumphant staging of Man of La Mancha. Not only does a few hours in the life of a playwright Miquel de Cervantes take you to some far out away places, it’s anything but your average cookie cutter musical.

Man of La Mancha tells the story of playwright/poet/tax collector Miguel de Cervantes and his faithful attendant Sancho, who get thrown into a dungeon by the Spanish Inquisition for foreclosing on a church.

In this dungeon, Cervantes is tried by his fellow prisoners to determine if he will be allowed to keep his belongings, including his precious manuscript of Don Quixote (the tale of the mad knight who goes out on a quest for chivalry and his lady love, Dulcinea). Cervantes’ defense is to engage the prisoners in acting out Don Quixote and the play from there moves back and forth between dungeon and the land of Quixote until prisoners and audience alike are so wrapped up in the story that they can hardly believe it when the Inquisition guards come to take Cervantes away for his real trial.

In this revival of the classic musical, director Robert McQuen brings a delightful mix of honor, innocence, and humor to the role of Alonso Quijana-turned-Don Quixote in this play within a play.

Robin Hutton’s Aldozna and Steven Ross’ Sancho are also strong—Ross making believable his unwavering loyalty to Quixote just because, as he sings, “I really like him,” and Hutton infusing her character with enough subtly and depth to make believable her transformation into believing herself worthy of being Quixote’s Dulcinea.

But some of the greatest standouts of this show come from the supporting cast. This includes Sean Alexander Hauk is tremendous as Padre—as evidenced by both his performance and the audience’s ecstatic reaction to his solos. His “To Each His Dulcinea” and “The Psalm” are vocally astounding.

That’s not the best of this musical prize. “Little Bird, Little Bird”—one of my favorite numbers of the show—provides the perfect level of eerie foreshadowing of what is to come. And the performance of the show’s infamous “The Abduction” number is a superb handling of this dark material through interpretive dance that is at once meaningful without being so graphic as to undermine the show’s main theme of positivity.

An audience favorite, Man of La Mancha has all of the elements of a classic musical—an inspiring journey, a message that good will triumph in the end, and a beautifully complicated score that seamlessly blends together humor, tragedy, and hope.