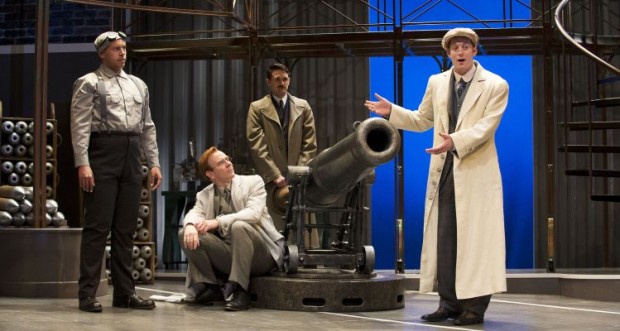 Wade Bogert-O’Brien as Charles (right) aims to prove a point in the Shaw Festival presentation of ‘Major Barbara’. Thom Allison as Bilton (left), Graeme Somerville as Adolphus (sitting) and Ben Sanders as Stephen (back) listen in for complete clarification.

Lets face it, fathers and daughters have always had problems seeing eye to eye. Whether it’s chromosomes or the generation gap to blame is debatable but when idealog Bernard Shaw persists in getting to the truth of matters, passion for defended positions can be heard like a cannon blast across a still body of water.

That’s because the Shavian approach to storytelling involves the presentation of crystallized arguments both for and against an issue, digging deep for honest answers and challenging whatever belief you hold within the narrative mix. Intellectual escapism doesn’t get any better than this!

In Major Barbara, now being given an explosive presentation at the Royal George Theatre thanks to director Jackie Maxwell’s watchful eye, estranged father Andrew Undershaft (Benedict Campbell) arrives by invitation at the home of his former wife Lady Britomart Undershaft (Laurie Patton) to say hello to daughter, Barbara (Nicole Underhay).

Barbara requests that Andrew visit the cash strapped Salvation Army where she performs daily fine works; he expects her to return the gesture and stop by the munitions factory that’s garnered him excessive wealth and power.

What follows can best be summed up as the mother of all ethicality battles that asks the question: If might is not right, whatever then is?

Benedict Campbell is devilishly good as a war worshipping family figurehead who makes no excuses for his defiant religion—residing as a millionaire. Andrew’s most omnipotent moment is delivered in a gut turning rant that cites poverty being society’s only true crime.

Delivering heartfelt lines like a sermon at Sunday service, Nicole Underhay is a divine blessing to the production as a simplistic soul saver that has her faith shredded by blood money. Barbara, a firm believer in ‘one true morality,’ is utterly dumfounded how ‘mutilation and murder’ profiteering can warp the human psyche and when she acquiesces with the surrendering words ‘There is no wicked side,’ your heart just skips a beat at her defeat.

There is so much to love about the Shaw Festival’s talent armed staging of Major Barbara that you may find the urge to experience it twice. With big ideas comes big analysis which is forever indicative of playwright Bernard Shaw’s affinity for messing with our heads.