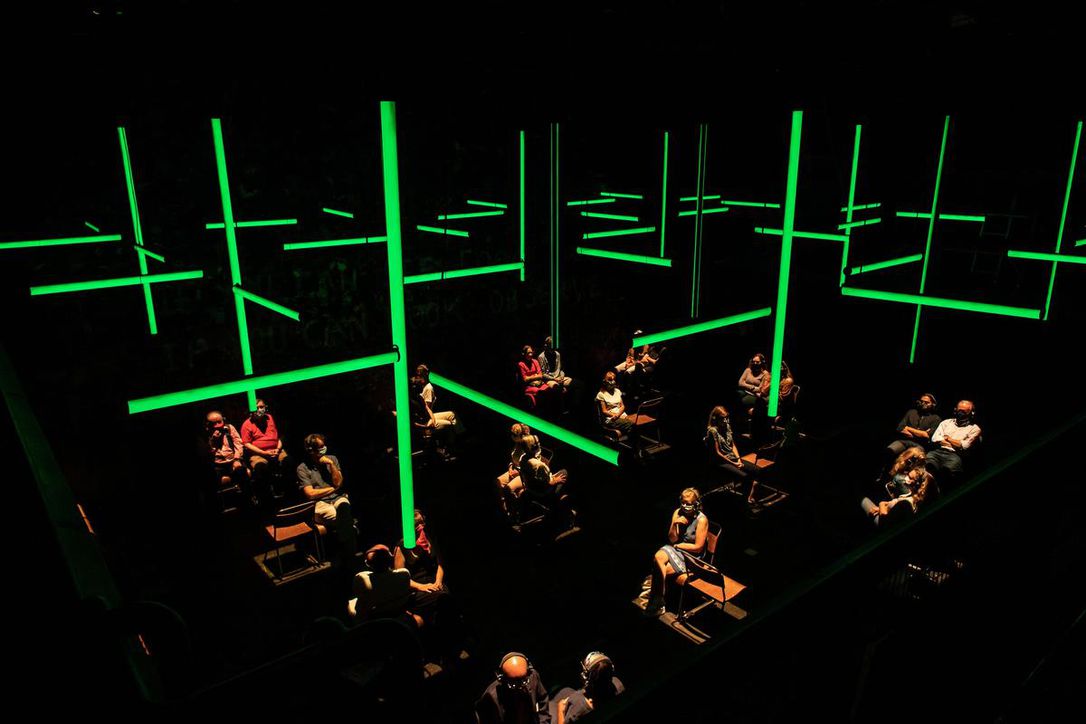 David Mirvish is pleased to present the international premiere of the Donmar Warehouse production of Blindness, a socially distanced sound installation.

Blindness will be presented on stage at the Princess of Wales Theatre beginning November 17, 2020 and will be the first indoor theatre presentation in Toronto since the pandemic shut down all theatres. (The start date may change if health and safety in our community are compromised.)

David Mirvish says: “For the last six months my staff and I have been working diligently to find a way to offer different forms of theatre in environments that are safe and comfortable.

“Towards this goal, we’ve been working with the unions and associations that represent artists, technicians and arts workers.

“We’ve also been working with the TELUS Medical Advisory Council (MAC), a team of Canadian medical experts who, together, have been advising a number of large organizations in their efforts to prepare an informed, science-based, and compassionate pandemic response.

“We, of course, aren’t the only ones who have been trying to find safe solutions for theatre to restart. Our colleagues around the world have also been on this quest.

“Our friends at the Donmar Warehouse in London came up with a brilliant and powerful way to tell a timely and important story in a theatrical setting. They came up with a unique adaptation of the modern classic novel Blindness by the Nobel laureate José Saramago, itself about the effects of a pandemic on a community.

“Blindness was a resounding success in August and September at the Donmar and helped to usher in the return of theatrical events.

“We are especially proud to be presenting Blindness for the first time in North America. It’s a first step to reenergizing the theatre community here, offering much-needed hope to arts workers and audiences alike.”

Award-winning playwright Simon Stephens (The Curious Incident of the Dog in the Night-time, for which he won both the Tony and Olivier awards for best play) has adapted Nobel Prize-winner José Saramago’s dystopian novel Blindness as a sound installation directed by Walter Meierjohann with immersive binaural sound design by Ben and Max Ringham. Juliet Stevenson voices the Storyteller/Doctor’s wife in this gripping story of the rise and, ultimately, profoundly hopeful end of an unimaginable global pandemic.

As the lights change at a major crossroads in a city in the heart of Europe a car grinds to a halt. Its driver can drive no more. Suddenly, without warning or cause, he has gone blind. Within hours it is clear that this is a blindness like no other. This blindness is infectious. Within days an epidemic of blindness has spread through the city. The government tries to quarantine the contagion by herding the newly blind people into an empty asylum. But their attempts are futile. The city is in panic.

Blindness had its world premiere at London’s Donmar Warehouse in August 2020, where it received rave reviews and re-opened the theatre for audiences for the first time in over five months.

AT THE PRINCESS OF WALES:

• The show runs 70-minutes without an intermission.
• Each performance will be limited to 50 people.
• Every precaution will be taken to ensure that each audience member is safe and comfortable during this very special event.
• All audience members must wear a mask for the entire duration of their visit for this event.
• All audience members will be seated (socially distanced, in pairs and singles) on the immense stage of the Princess of Wales Theatre.
• Each person will be given sanitized headphones with which to be told the story by the illustrious stage, screen, TV and audiobook star Juliet Stevenson. The sound is designed to be binaural, making the work sound as if it were physically happening around you, putting you in the centre of the action.

Blindness, a socially distanced sound installation with the voice of Juliet Stevenson, based on the novel by José Saramago, adapted by Simon Stephens, directed by Walter Meierjohann is a Donmar Warehouse Production.

More details about dates, times and tickets to Blindness will be announced at the end of October, 2020.