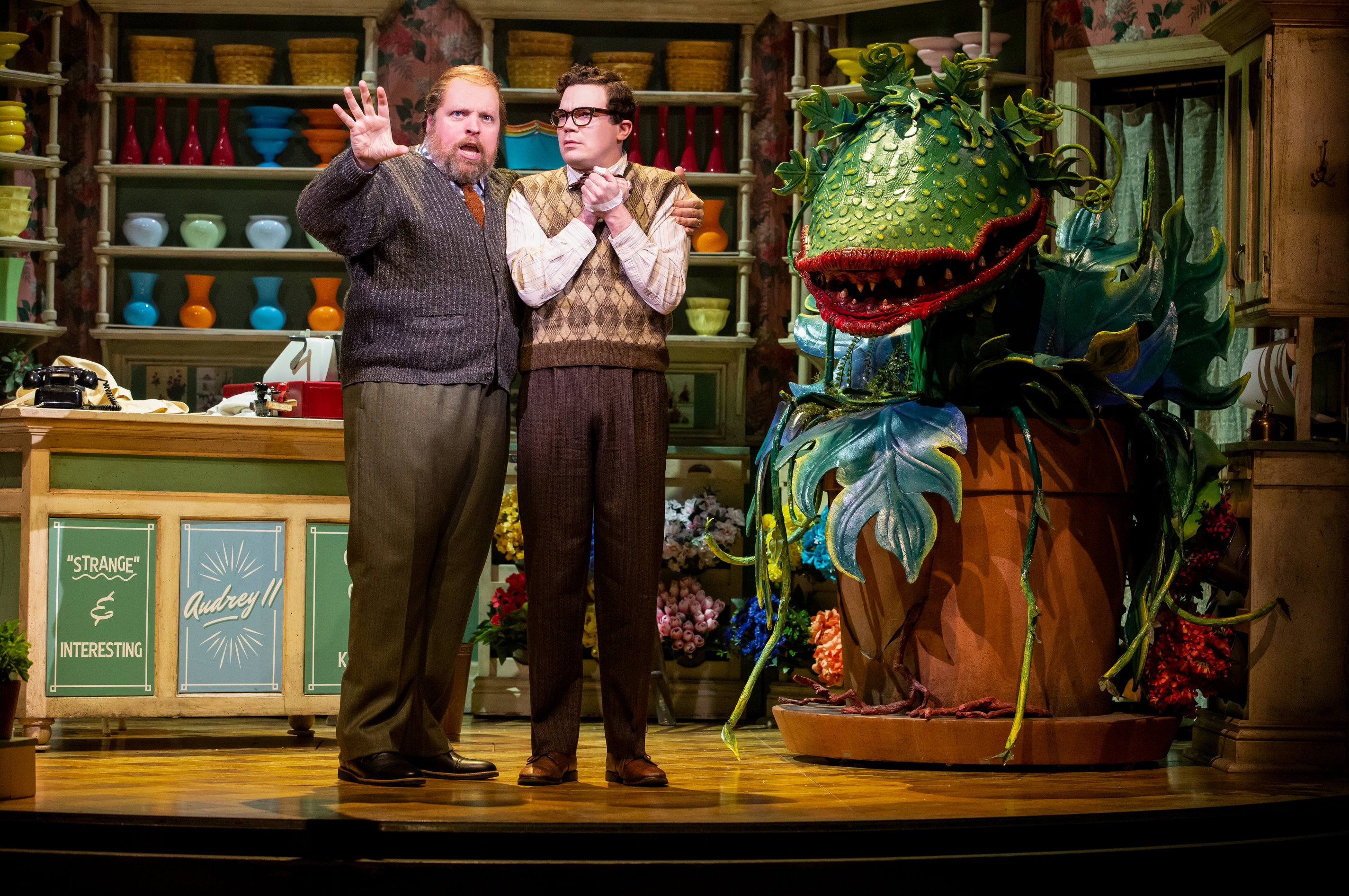 Business is all about a shared vision and secure but with the larger than life jaws of doom in the background needing special attention, this is one venture that may not pay off for all parties involved. Steve Ross as Mr. Mushnik (left) and Andre Morin as Seymour (right) live for laughter in Little Shop Of Horrors on stage until November 2, 2019.

Is it just a coincidence that people are being eaten up on stage in Festival country this summer so we can enjoy delightful song and dance or could this signal the beginning of a vegan plot to convert the masses to stick with harmless greens and non-dairy products?

Case in point: The botanical digestive mishaps in Little Shop of Horrors which is bursting with magical 50s style doo-whops and B-Moviesque absurdity.

Adapted from the 1960 film by Howard Ashman and Alan Menken who went on to serve up Little Mermaid, Beauty and The Beast and Aladdin, the musical takes place in a skid-row flower shop as Seymour‘s (Andre Morin) growing Venus Flytrap is attracting quite a bit of attention in the neighbourhood.

He names the plant Audrey II in love-struck honour of work mate Audrey (Gabi Epstein). But this Flytrap has an appetite far bigger than what a few insects can suffice and when Seymour is runs out of liquid snacks, he begins looking for alternate sources of food to keep Audrey II bringing in the customers.

A dark comedy like this with big laughs throughout the show is totally irresistible. Yet it’s seeded themes of making the right choices in light of personal gain has its poignant touches.

There’s no better musical director for this kind of theatre fluff than Donna Feore whose gift for comedy is deep rooted by a natural sensibility for slapstick. She cranks up the pace when the text feels weighty and abruptly hits the brakes when he detects a beautiful moment.

Which is why she’d have little trouble deciding which leads to harvest this memorable musical. The rascal agility of the exquisitely animated Andre Morin blends in nicely with Gabi Epstein’s semi-clueless bombshell persona with both artists making this such a memorable musical garden.

Completing the trinity of talent, of course, is the ceaselessly entertaining Dan Chameroy as the bruising biker and dental sadist, Orin. It’s Chameroy’s unique character signature that gives the play the true flavour it needs.

Little Shop of Horrors is the the ideal way to celebrate the season and it’s colourful, clever and laugh-out-loud appeal requires no story pruning whatsoever.