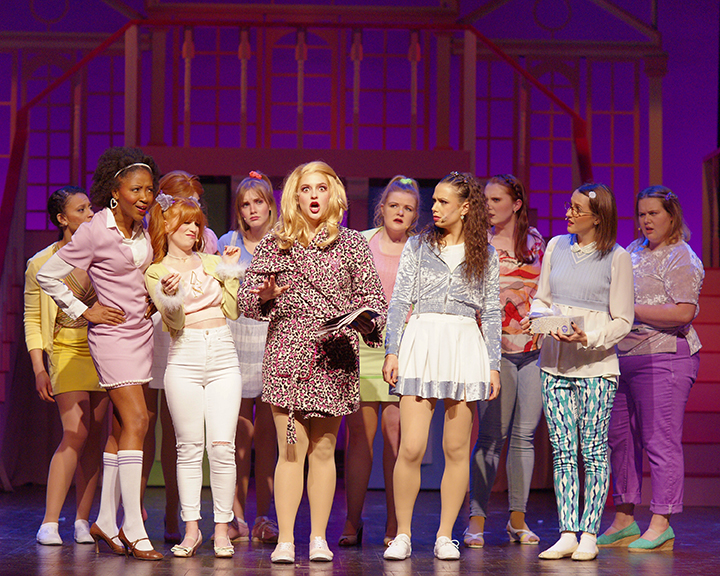 The verdict is in: Hart House Theatre’s Legally Blonde The Musical establishes itself as a delightfully rewarding revival.  Get your bend-and-snap on this month and remember that believing in yourself never goes out of style.

One of the most trustworthy formulas that drives a comedy is undoubtably triumph over adversity with making fun of the eternal pompus placing a distant second.

Legally Blonde The Musical, directed by Saccha Dennis on stage at U of T,  follows these specific guidelines in subponaeing laughter for what may be the season’s best offering at the Hart House Theatre this season.

Don’t expect much difference in the musical stage version that borrows its storyline from the 2001 box office hit where West Coast fashionista Elle Woods (Emma Sangalli) gets dumped by her boyfriend Warner (John Carr Cook) only to follow him to Harvard and pursue and education in law.

Fitting in takes a bit of practise for the adorable Elle but with the murder trial of the century on the line, her expertise in hair salon best practices may ultimately save the day if she learns to trust her instincts.

Sangalli’s singing gets the job done in pure ivy league honour which a notable level of enthusiasm to carry the production. The ensemble’s fantastically energetic dancing adds another masterstroke when it’s time to step back  from the dialogue exchanges with sorority sisters right behind her every step of the way.

An audience song favourite that dances colourfully around politically incorrect assumptions and stereotypical behaviours by Carlos (Robert Popoli) is found in the toe-tapping spectacle Gay or European.

In our age of social justice, Legally Blonde The Musical is a light and lively lark that makes it feel good to be back in school even for a couple of hours.