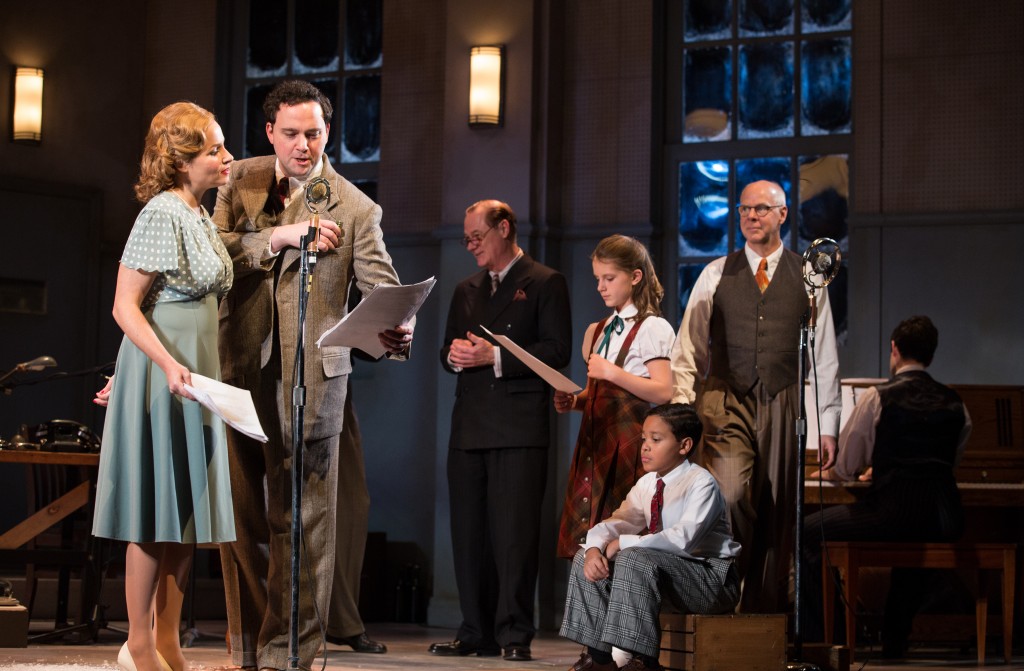 Raquel Duffy as Mary and Gregory Prest as George Bailey (both left) give breathtaking performances in a play that speaks about values, last chances and a greater social responsibility expected of all of us.

Anticipation ran higher than a 25 foot snow bank when Canadian Stage Company climbed It’s A Wonderful Life in 2008.    One problem though, despite a stellar cast to get playgoers into the holiday spirit, something just didn’t click in the 1940’s radio drama transformation.

Flash forward to 2016 where Soulpepper Theatre Company ploughs the way again at the Bluma Appel Theatre for another attempt at the adapted cinematic masterpiece.

All the familiar characters are here in this tale of financially tight living after the great depression where big dreamer George Bailey (Gregory Prest) finds peace of mind in a ‘shabby little office’ with wife, Mary (Raquel Duffy), firmly by his side at the homestead until a ‘money grabbing old bugger,’ Mr. Potter (Diego Matamoros), moves in for a cunning closure of the financial institution that once bounded an entire community.

And as for that earnest angel, Clarence (Oliver Dennis), looking to score a pair of wings—oh yeah, he’s listening for that ringing bell.

Don’t let the absence of the traditional story setting dissuade you from experiencing this iconic holiday narrative live on stage.  Not only does the creative team deposit a wealth of creative goodies including dramatized sound effects, you just may pick up on a few new elements of the story not easily seen in the movie.

There are elements of Bedford Falls’ caring, enduring and old fashion love in each of the places we  originate from.  Soulpepper Theatre’s It’s A Wonderful Life reminds us that we never have to wait until Christmas to benefit from such joy, it’s always in you to give.