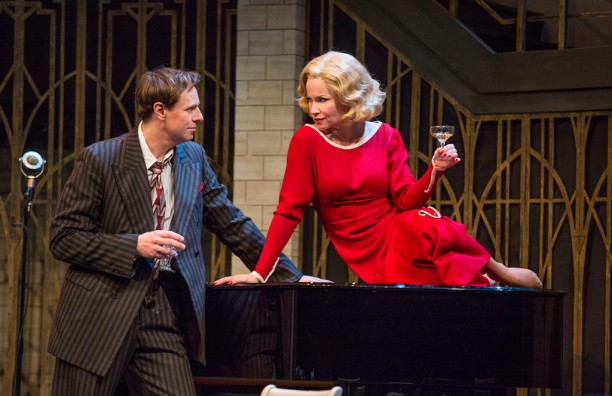 Friends in strange places: Dan Chameroy as Harry (left) and Raquel Duffy as Irene (right) provide a healthy dose of optimism at a time when there’s very little going around.

It’s striking how designer Lorenzo Savoini’s stylish choice of attire and impressive period staircase in Idiot’s Delight makes the Young Centre for the Performing Arts feel like an afternoon at The Shaw Festival, an impression further fortified with a first act dominated by fear and uncertainty of war.

But if you’re not a fan of the 1939 movie starring Clark Gabel (which features an alternate ending than its theatrical predecessor) there’s not a lot to glean from Robert E. Sherwood’s Pulitzer Prize-winning play that still serves as a welcomed addition to the 2014 subscription season.

Set in an Alpine hotel with an ally targeted airfield just outside the front doors and political tension rising throughout Europe, the comedy backed drama gets stuck somewhere between a war story and a romantic comedy as it tables the conflicting attitudes toward political unrest.

Dan Chameroy gives the show the performance punch it needs with a true Alan Alda lightheartedness reminiscent of the M*A*S*H television series with Raquel Duffy aptly closing the gap of privileged mistress and citizenship sufferer.

Yet despite appropriately fitted actors anchoring the remaining roles, the structurally sound premise regrettably doesn’t stage very well for story sophisticats. Easy to follow, yes, but an absence of genuine character appeal combined with a moderately progressive narrative makes it questionable if the experience was worthy of the emotional investment.