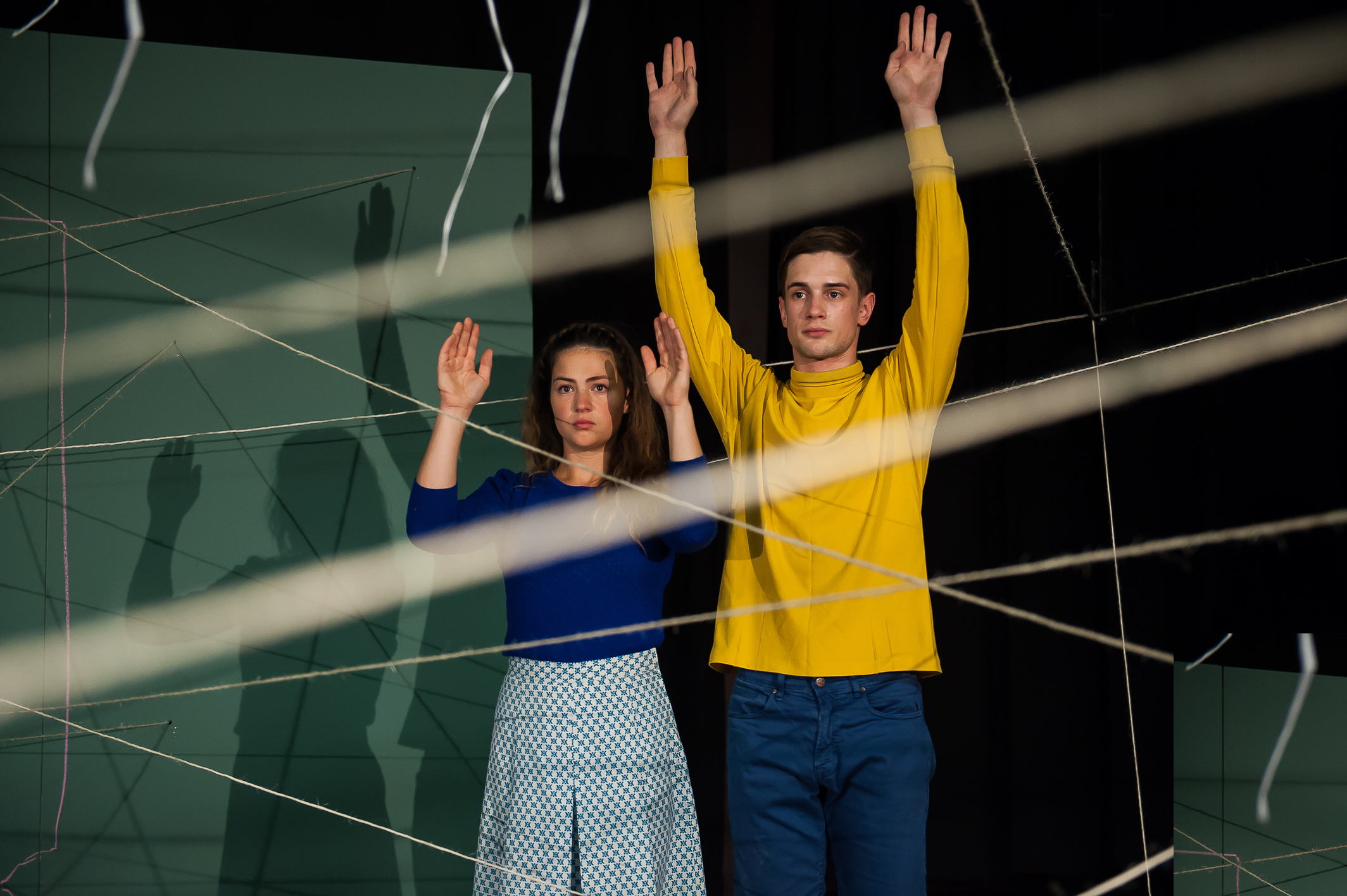 ‘Children understand everything,’ is one of the haunting lines from the box office hit US/THEM which kicks off the 2019-2020 Off-Mirvish Season this month.    A brilliant, utterly compelling drama, US/THEM tackles the Beslan school siege from the perspective of two wise, indomitable youngsters caught up in the tragedy.

Written and directed by Carly Wijs, the play made its world premiere in 2014 in Belgium, produced by the acclaimed Brussels-based BRONKS theatre company. It toured Europe and then played the Edinburgh Fringe Festival in 2016, before transferring to the National Theatre in London, where it had a celebrated sell-out season, and has subsequently been touring the world.  A brilliant, utterly compelling drama, US/THEM tackles the Beslan school siege from the perspective of two wise, indomitable youngsters caught up in the tragedy.

In September 2004 a group of terrorists stormed a school in Beslan, Russia, taking almost 1200 people, including 777 children hostage. Three days later, many were left dead. By capturing this terrible event from the unfiltered point of view of children, playwright Carly Wijs has created something unexpected and revelatory: a wryly humorous, poignantly matter-of-fact piece of theatre about how the young deal with trauma, and what leads people to do the unthinkable. Says Carly Wijs, “A child, unlike an adult, does not think: ‘That could have been me.’”

US/THEM is not a straightforward account of the Beslan tragedy, but an exploration of the entirely individual way children deal with traumatic situations.  Inspired by conversations with the playwright’s 9-year-old son about the 2013 shopping mall terrorist attack in Nairobi. By talking about elements of current affairs with him, she acquired a direct insight into the way a child absorbs and understands certain topics.

“Children have a different way of looking at the world of adults. We mustn’t project onto them the way that we feel about things. When we watched a documentary about the Beslan hostage-taking — Children of Beslan on BBC — we were all surprised by the children in it and their reaction once the tragedy was over. They didn’t show any emotion. The neutral tone in which they talked about it surprised us. They even spoke about the games they had played while they were being held hostage. One child in the documentary simply said, ‘Children understand everything.’ As artists, it is important for us to talk about the terrible things in life, and to consider them from a child’s point of view.” says Carly Wijs.

This play had its premiere before terrorist threats and attacks had yet to become an everyday reality. It is now more appropriate than ever for us to have in-depth conversations about this, and to include children in those conversations. By doing so we can hopefully make the incomprehensible a little more comprehensible.

Gytha Parmentier graduated from the KASK in Ghent. She has worked as an actress and dancer with het KIP, Luxemburg vzw, Alain Platel, Ontroerend Goed, fABULEUS and Julien Neirynck. Since 2017 she has been touring with Show, the second piece written and directed by Carly Wijs for BRONKS. She is part of the cast of Beat It, a co-production of Nevski Prospekt (Belgium) and the Suiss dance company Kollektiv F, which premiered this season. Gytha featured in several short films, TV-series and the movie De Maagd Van Gent, directed by Nicolaas Rahoens. In 2016 she started a twerking collective called Twerkshop.

Her male counterpart, Roman Van Houtven, trained at P.A.R.T.S. dance school. During and after his studies, he worked on projects with fABULEUS, Impuls Company, Dancingkids (Rosas Education), DE studio, Galacticamendum, and Daniel Linehan/Hiatus. In association with BRONKS, De Munt, and Q-O2, he choreographed the music theatre productionFrankenstein. In 2017 he was nominated for the BILL-award. This season he performs the solo Razen, the first international production of British playwright Stephen Laughton’s Run, directed by Peter Schoenaerts, for Fakkeltheater. Currently he is preparing the creation of a performance for the Ghent-based theatre company KOPERGIETERY, which will premiere in fall 2020 and tour in 2021.