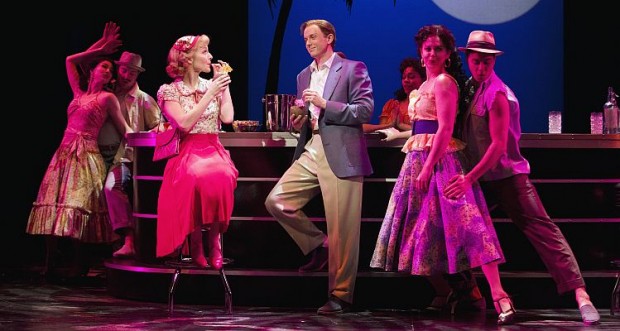 If having an unforgettable time at the theatre was a crime in festival country, audiences would be serving a life sentence after experiencing ‘Guys and Dolls’ on stage until October 12. Elodie Gillet as Sarah and Kyle Blair as Sky (centre) deliver captivating performances in this family friendly story vehicle.

Given the high level of Yankee vacation traffic flowing into Niagara-on-the-Lake during the summer months, a smart theatre company has to toss our beloved neighbours a bone every now and then. The Shaw Festival’s decision to mount Guys and Dolls as a follow-up to 2012’s smash hit Showboat is downright brilliant in satisfying the hard-to-please entertainment pallet.

And while theatre’s unwritten rule specifies you never tackle an iconic musical unless you mean it, director Tadeusz Bradecki approaches Frank Loesser, Jo Swerling, and Abe Burrows’ hope brimming creation from yesteryear like it’s his Broadway debut. The fast moving production is squeaky clean from its fancy foot work to its beckoning song offerings.

Which is a peculiar place for creative elements to come together so snappily in a big city setting of crap games and markers where thugs need a big break and galls need a lot of understanding.

Nathan Detroit (Shawn Wright) has his back against the wall trying to finance a gambling event and wages a cool $1,000.00 with Sky (Kyle Blair) that he can’t get Sarah Brown (Elodie Gillett) to take a dinner trip to Havana. The odds are in naughty Nathan’s favour but he has another matter requiring attention—Adelaide (Jenny L. Wright) a girlfriend of 14 years who impatiently wants a ring on her finger.

And only a dozen sinners sitting front and centre at the Save-A-Soul Mission is needed to work miracles for the adorably drawn characters.

The show’s principal players leave smiles galore throughout the scenes yet it’s not until Thom Allison’s Nicely-Nicely Johnson steps forward to belt out a tune do you get the keen sense he has the full house of tempted patrons firmly in his grasp.

If only life could guarantee the kind of happy endings displayed in the 1950s when Guys and Dolls wowed a nation. Flash forward more than half a century latter and this high stakes musical revival still feels so good to come home to.