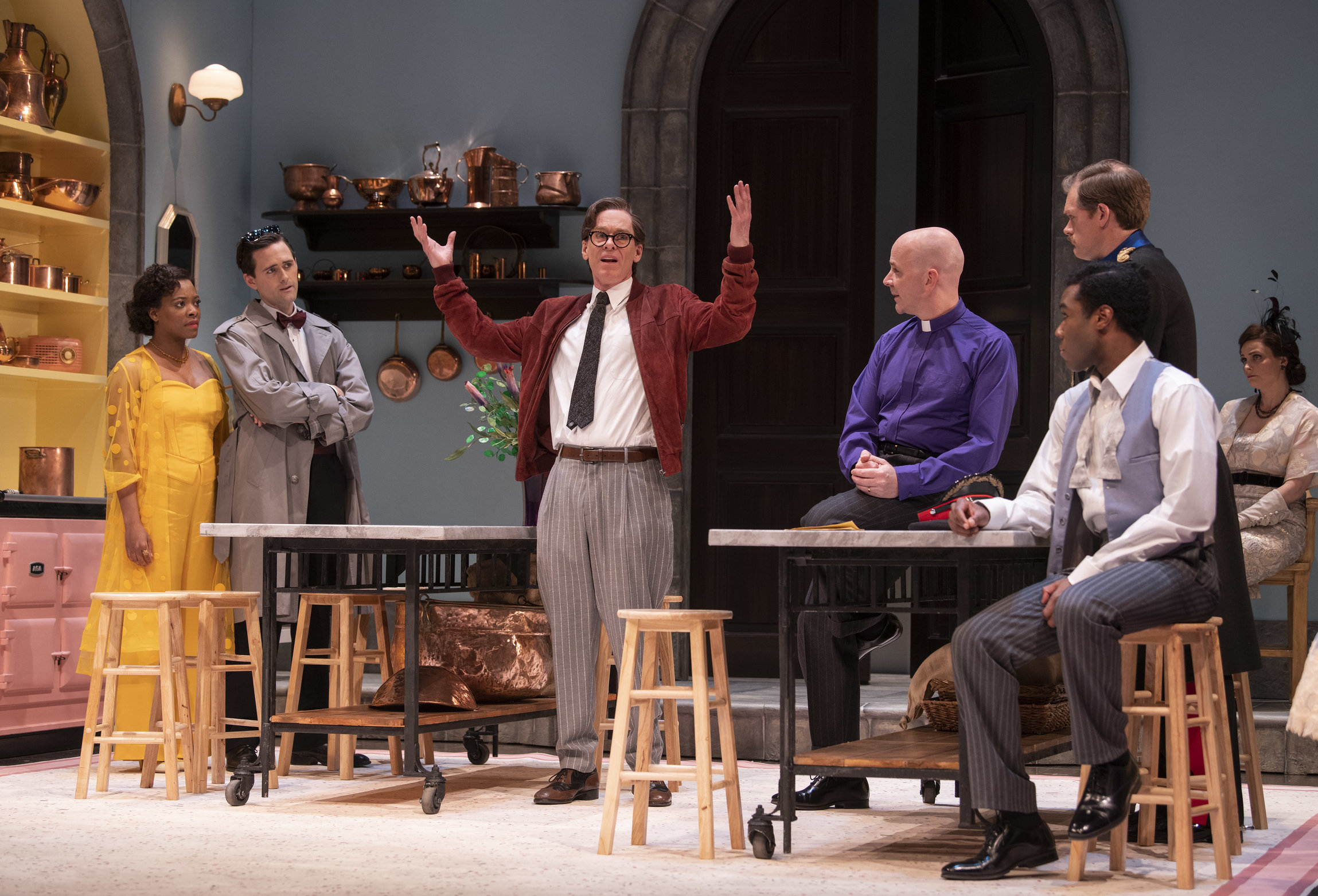 Steven Suttcliffe as Reginald Bridgenorth (centre) looks hard for a consensus on coupling in the Shaw Festival’s laugh out loud presentation of Getting Married on stage until October 13, 2019. Leave all previous conclusions in the lobby for this one, there’s amusing takeaways for every audience member.

C’mon, who can resist the prospect of marriage with all the emotional butterflies and mushiness associated with making an identified soul mate a permanent fixture throughout the three critical process steps in getting there.

1)     Wedding planning…and the hysteria of uncontrollable liquored guests at the reception.

2)     Stability and honour of a respectable domestic life…providing secrets remain only within the four walls of the home.

3)     Gratification of life long companionship as two people sail into the calm seas of aging…given that some brand comes up with a better ointment for joint pains.

And while everyone, it seems, has a tendency to weigh in on the secrets of a never-ending union, wisdom has proven ongoing acts of love, continuous forgiveness and meaningful communication gives most couples the competitive edge in going the full distance.

Except in Bernard Shaw’s Getting Married where the ingenious playwright is in hot pursuit of a love story to mark the completion of all love stories with his admired brand of charm, wit and, of course, the totally unexpected.

Director Tanja Jacobs relies on a mostly naked stage with a bar stool, bouquet of flowers and a ribbon lure audience into the opening scene of her laugh trap where decisive issues are duly noted, the spirit of negotiation flies high, and somehow agreements are reached between meticulously crafted characters. So loveable to observe, so easy to take sides, the commentary on a new marital framework of high class Britains demonstrates that snobbery remains in perpetual fashion.

That’s because the myriad of perspectives—some bordering on total insanity—is something one needs to take with plenty grains of salt to get a deeper understanding of the needs, wants, and desires of others.

Steven Sutcliffe’s will have you in stiches over Reginald’s failed relationship while Marla McLean’s ‘mermaid or vampire’ Mrs. George Collins makes you sit up and pay attention to what kind of tough fabric a woman can be made of.

Martin Happer’s ‘silly soldier man’ Boxer is empathy worthy in his drive ‘for better or for worse’ arrangement despite his clumsy shortcomings. Graeme Somerville’s Alfred can’t be any sharper as an ecclesiastical superior standing up from the sacrament of marriage and can’t imagine why anyone would want to downgrade it with endless conditions and protections

The ‘First English Partnership Deed’ nobly takes shape in the piece to improve alliances of all involved while it remains questionable if lunacy or practicality will save the day.

Despite the tendancy to love someone we often never fully understand until the knot is tied tightly, Getting Married won’t alter your opinion of the deeply cherished bond but it will certainly provide endless giggles to help you in moments of re-evalutation.