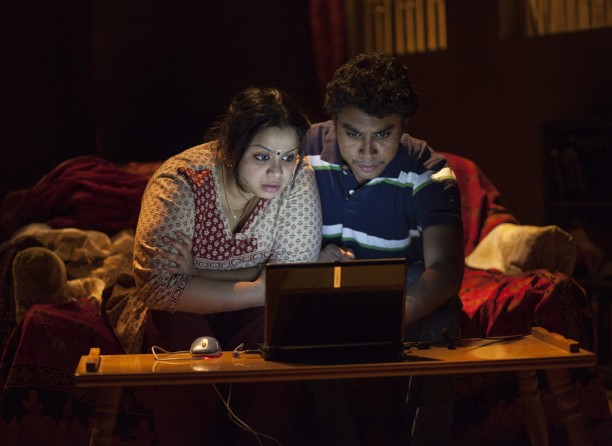 Anusree Roy as Malini (left) and Andrew Lawrie as Sharan (right) try to the right the wrong in Nightwood Theatre’s gratifying staging of ‘Free Outgoing’ at Factory Theatre until Feb. 16.

‘You don’t know your child that well, do you?’  It’s an accusation / query hybrid that is perhaps the most painful comment that can be lobbed at a parent in denial.  But when Malini (Anusree Roy) is hit with these nine words, little does the single mom know how much truth there is behind the inescapable answer.

That’s because when youth, curiosity, and the heat of the moment prevail within a private setting, things can only get extremely naughty.

Playwright Anupama Chandrasekhar’s emotionally charged Free Outgoing parses the social repercussions that result from a teenager’s sex video going viral.  Lack of common sense creates the problem, lack of self control fuels it.  Set in India, this is a story that surpasses all expectations due to its layers of cultural complexities which just wouldn’t have the same impact if told from a North American vantage point.

Yet it’s Anusree Roy who serves as the lit fuse in the dramatically explosive presentation.  Her finest moment comes when she pleads with Sharan to unlock a bedroom door in one last effort to salvage their lives.

As for Deepa, the ‘model daughter’ behind the sexually graphic controversy, playgoers never see her nor do they need to.  She is, after all, a symbol of inequality, it’s her disintegrating family that’s the palpable voice of horror.

Make no mistake, Nightwood Theatre’s got the down low on the downloadable.  While Kelly Thornton finds herself at the intersection of everything to gain and nothing to lose in this North American premiere, the piquant director knows how to work the bare essentials in debunking the myth that parents just don’t understand.