Flesh And Other Fragments of Love 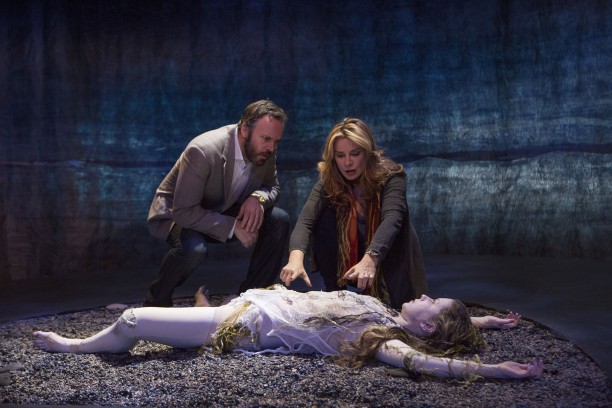 Blair Williams as Pierre (left), Maria del Mar as Simone (right) and Nicole Underway as Mary (front) star in Marie Cardinal’s lucid translation of Flesh and Other Fragments of Love at Tarragon Theatre.

A Tragedy Of Utter Brilliance

Why is it that some vacations go according to plan while others fall disappointingly short of expectations? While it’s almost a certainty that disfavourable odds work against you from the moment of a plane’s final descent, it may also be the result of extreme short sightedness for the decision that has been made.

Evelyne de la Chandeliere’s touching tragedy isn’t at all about vacations yet the playwright uses one troubled couple’s getaway to set the stage for an unusual disclosure and analysis of all that goes wrong on the marital landscape.

“A body? A dead body? Whose body?’ asks a notably concerned Simone. It’s the first of many questions from the opening scene and those that follow never have the clear cut answers that could have prevented the present state of affairs.

This, more than anything, is what accounts for the utter brilliance of Flesh and Other Fragments of Love. It’s not what is said that gives this award winning contender a lofty reign but rather the method in which the message is conveyed that ultimately does.

Maria del Mar is radiant as an emotionally damaged better half. Lively, gay and carefree the character is definitely not thanks to her ‘punishment’. When the performer addresses the futility of the union she’s inherited with endless chatter, only then do you comprehend the enduring strength of a woman.

Unfaithful partners typically embrace a familiar antagonist shape but not so with Blair Williams’ virtuous delivery. Pierre never seems remorseful for the conditions of the wedded path the duo agreed to until the birth of their first child complicated matters. This is, after all, an actor whose classical theatre training never allows a role to stray from its intended motivational design.

The play’s theatrical expanse is widened wholly by Nicole Underhay’s empathy exacting Mary. Was her death an accident, was it a suicide or something else? An optimist’s ocean crossing trek to NYC resulting in a dream unfulfilled serves as the ‘identical fate’ that awaits the romantically plagued duo. It’s completely different sounding Underhay than you’ve ever heard before and constant limb movement gives her exploit a truly morbid context.

As the husband and wife diligently imagine Mary’s life throughout the play, she conceptualizes theirs.

Love is forever a consciousness many take for granted until it’s far too late turn back. Director Richard Rose’s expertise at simmering and stirring all things sentimental makes this 2014’s first great play of the season.