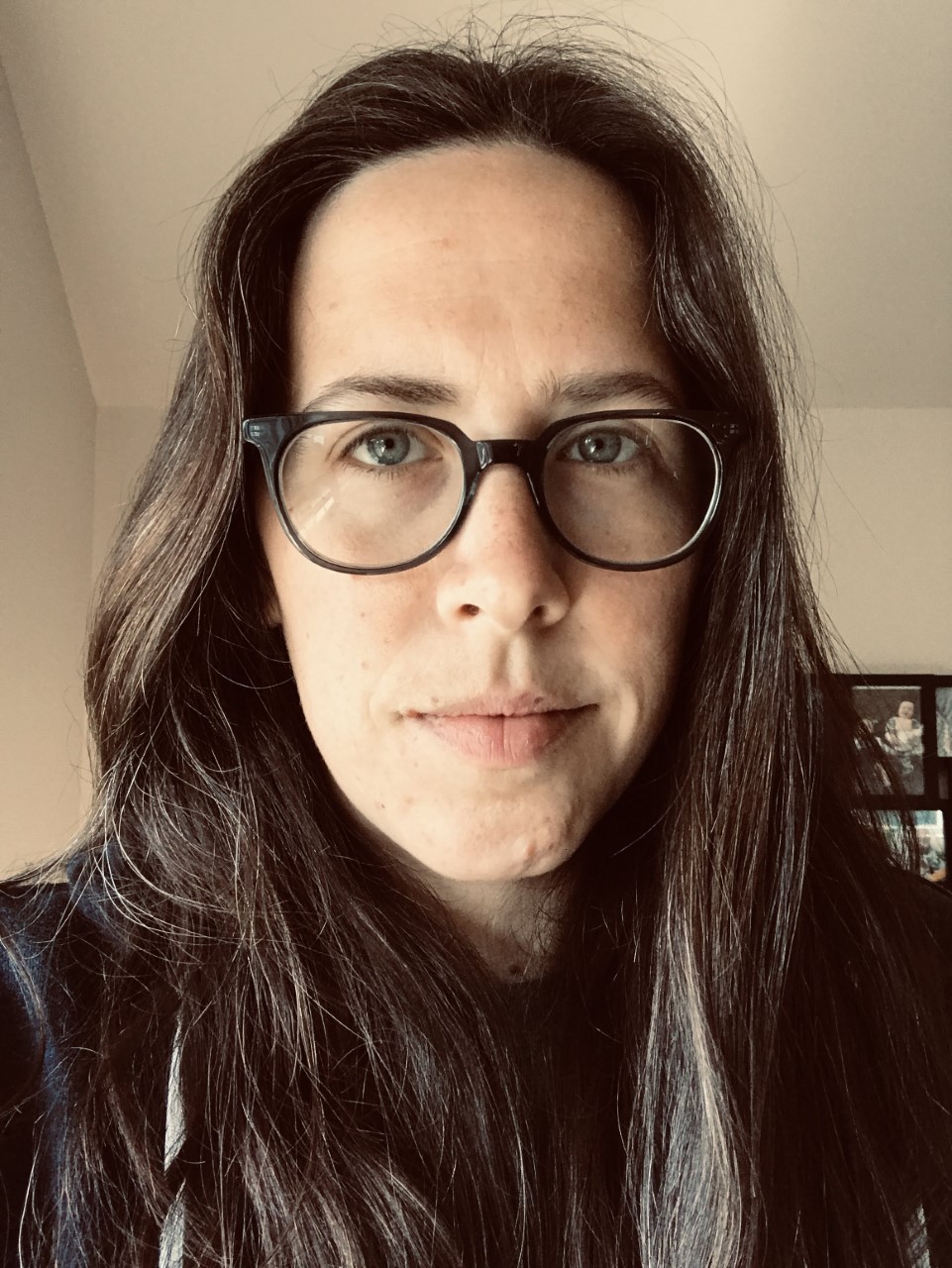 It’s fair to say that director Erin Brandenburg is a survivor.

No, she hasn’t been evacuated from Canadian wildfires or flooding as of late.  However,  like most artists caught up in pandemic uncertainty (not to mention schooling young ones at home) she’s hopeful that Canadian theatre has taken important steps at being more equitable despite the long road of progress ahead.

Remaining idle was never an option so with an opportunity to shape playwright Johnny Wideman’s Forgiven/Forgotten for Theatre Of The Beat (TOTB) came along for her, it’s easily to see why story lovers are making time to sample the dramatic tension that poses more questions than it tries to answer.

Screenings for the audio visual drama debuts at Ken Seiling Waterloo Region Museum November 19, 2021 before making it’s way to Toronto’s Danforth Mennonite Church November 26-28, 2001.    For further information including an experience from the comfort of your own home visit www.theatreofthebeat.ca.

WHAT APPEALED TO YOU ABOUT THIS WORK THAT YOU FELT WAS WORTHY OF YOUR DIRECTORIAL EXPERTISE?

The play is written to start a conversation and that is always an exciting place as a theatre maker.  I also think that the pandemic has shown us how important it is for communities to care for each other.

We’ve been distanced in a lot of ways through shut-downs and closures and not being able to be together in the same ways but people are suffering and need the support of the community.

Talking about offenders reintegrating into communities is also important as there have been more early releases due to COVID.  Families and communities are facing additional challenges in part because of this isolation.

This play looks at how a community deals with an offender who is reintegrating into the community and shows the support or lack of support that can sometimes happen.

FORGIVEN / FORGOTTEN IS PRODUCED AS AN AUDIO DRAMA.    HOW DIFFICULT WAS BREATHING LIFE INTO THE STORY WHEN YOU ARE  MORE ACCUSTOMED TO LIVE  STAGINGS?

Working with only audio as the main storytelling device is a newer element for me.  I directed another Zoom play/Podcast with TOTB last year and finding ways for the actors to connect can be challenging when you can rehearse and work in person.

For this presentation,  we were able to record together in the same space but turning a staged play into an audio drama was a bit new for me.

Luckily a lot of the work was done by our audio designer Andrew Penner.

OF THE MANY STANDOUT MOMENTS IN THE PIECE, WHICH SCENE DO YOU FEEL REVERBERATES THE MOST FOR AUDIENCES?

The whole play is important but I really like how PJ Prudat handled her character Mary Ann’s breakdown.

She’s dealing with PTSD from a breakin a few years before and meeting the character, Phil, played by Frank Cox O’Connell who was incarcerated has triggered a lot of stress and panic attacks.

What I find remarkable about this character is that even though she is one of the most affected by Phil, and has a strong emotional response, she is also the one who insists that they continue to welcome the family into their home and offer them support in the community.

PETER FERNANDES AND FRANK COX O’CONNELL ARE ON BOARD FOR THIS.  HOW HAVE THEY CONTRIBUTED TO THE SHOW THAT MADE SMART CASTING SENSE?

Frank who plays the character Phil, and Peter who plays Richard, are fantastic actors and wonderful collaborators. They’re also really smart about working with new scripts and have a great faculty for play – which is so helpful when you are trying to find a scene or establish a character in a short amount of time.

I’ve also known them both for years and they are dear friends so it was wonderful to work together for a few days on this.

ROUNDING OFF THE CAST ARE 3 MORE FABULOUS PERFORMERS, HOW HAVE THEY HELPED THIS STORY SHINE?

I was really lucky to have this amazing group on this project.  I’ve been very fortunate to work with all of the actors on Forgiven/Forgotten on previous projects.

PJ Prudat and I last worked on a show together at RISER with Spiderbones called Everything I Couldn’t Tell You but I’ve admired her work as an actor and writer for years. She has a great depth as an actor and is wonderful to have. PJ plays the character of Mary Ann in our story who is married to Richard – and actually Peter and PJ played spouses before in a production at Shaw a few years ago.

Christina Leonard, who plays Robyn, has also been in other TOTB productions  and will be in the upcoming Selah’s Song.   She’s an actor who is always up for any challenge and is a lot of fun to work with.

Zach Parsons is also someone I love working with. He was also in a previous production with TOTB and is a multi-talented actor/singer/songwriter.

ABSOLUTION, DUE PROCESS AND NEIGHBOURLY EXPECTATIONS ARE THEMATIC DRIVERS IN THIS PRESENTATION.  HOW DO THESE THINGS MERGE AT THE NARRATIVE’S CROSSROADS?

So the play looks at two families in a community.

Robyn, a struggling single mom, is welcomed and supported by another couple with a young family, Richard and Maryann through their local church. Mary Ann and Richard befriend Robyn and her son until they find out that Robyn’s husband Phil is serving a sentence and about to be released on parole.

This news triggers panic attacks in Mary Ann who has previous trauma from a home break-in two years ago and a strong reaction from Richard who along with the church council decides to ask Phil not to attend their church. Richard is also struggling at work having made a series of mistakes and is trying to make amends with an important client.

The stories interweave and look at questions like who deserves forgiveness? Whose job is it to find justice? How do you support those affected by crime – either as victims, offenders or family members and balance accountability and moving forward?

WHICH ONE OF THESE SPECIFIC THEMES  STRIKES THE DEEPEST CHORD IN YOUR OWN LIFE?

The importance of community has really been impressed on me the past few years. I grew up in a small close-knit [town] and know the importance of the support and the hurt when there is a lack of support.

For people struggling with integrating back into a community, or for those who have been harmed in a community, it can be very difficult because you feel like rejection is a very real risk.

This play is aimed more at the people who are secure in their places in the community, and how they could perhaps extend that security and support to others, even in challenging circumstances.

MODERN DAY SOCIETY HAS BEEN KICKING AWAY AT THESE SAME PROBLEMS FOR 100+ YEARS.   DO YOU FEEL THIS IS SOMETHING A COMMUNITY CAN EVER CORRECT?

Our criminal justice system has a long way to go in achieving justice for the offenders or the victims. I don’t think jail is a place where people can feel vulnerable and actually interrogate their behaviour or learn from it.

We don’t actually want to rehabilitate people, we want to punish them. We give someone a sentence and then once they’ve served their time they are back in society. But is that actually justice?

Often they are put back in and expected to reintegrate without a lot of support and so many individuals find themselves in a cycle that is difficult to change.

I feel like restorative justice offers some better solutions for victims and offenders to find healing and perhaps break the cycle. And while I am glad that more organizations are looking at restorative justice methods but I think there is a long way to go.

WHAT SHOULD AUDIENCES TAKE AWAY FROM A STORY LIKE THIS?

I hope they leave with some questions about what they can do to help those impacted by crime and  consider their own role as someone in a community and consider what ways they haven’t offered support and ways they can do better.

I also hope they think about how challenging and difficult situations are how we grow as a community and not run away from things because it may make them feel uncomfortable.