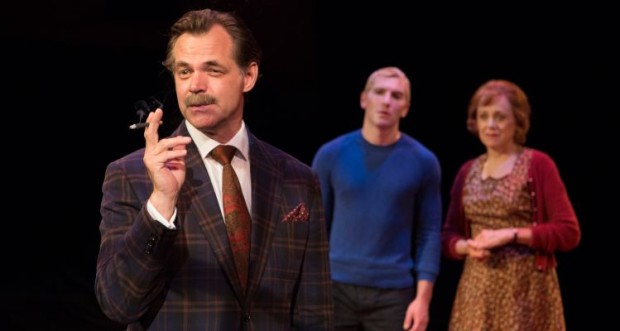 Stuart Hughes as Ed (right) is a master of damage control in the Soulpepper Theatre Company staging of ‘Entertaining Mr. Sloane’ where nothing is coming up roses at a home on the edge of a garbage dump. Summer’s blackest comedy plays Young Centre for the Performing Arts until August 17.

There are people you want to keep close by your side throughout the good times and the bad. There are others you’d prefer not coming within a fifty-foot radius of you under any circumstance. The trio of social incomprehensibles driving Entertaining Mr. Sloane are a fantastic evening of fun that illustrate it’s an every man for himself world in which we live.

Playwright Joe Orton knew that the edgy unpredictability of human nature never goes out of comical style. Weave in some ornamental word play, slap on a layer of aloof desperation and a clever plot has no boundaries.

And when Sloane (David Beazely) decides to occupy a room that landlady Kath (Fiona Reid) has available, her aging father, Kemp, (Michael Simpson) has the uncomfortable feeling the lodger is not a complete stranger.

Kath’s brother, Ed (Stuart Hughes), swoops in for a closer examination of the living arrangment and in good faith extends an offer of gainful employment to Sloane. With such snug story pieces firmly in place, really, what could possibly go wrong?

Fiona Reid is delightfully daffy as a flirty proprietress who goes to extreme making certain that she’s not left alone in the chaos aftermath while Michael Simpson secures senior citizen compassion for being in the wrong place at the wrong time.

David Beazely’s opportunist boarder is two scoops of crazy in his search for ‘understanding’ to his situation. As a ‘possessor of two bank accounts’ businessman who knows the importance of reputational risk, enter Stuart Hughestoreason with the misfortunate ordeal that’s transpired. His best laugh-out-loud moment comes in a degrading assessment of his sister’s futile appeal.

With ‘an agreement to suit all tastes,’ all parties get what they want in the highly amusing 150-minute presentation. Director Brendan Healey can take a bow for gifting playgoers with theatrical snapshot of hopeless lives giggly gone awry.