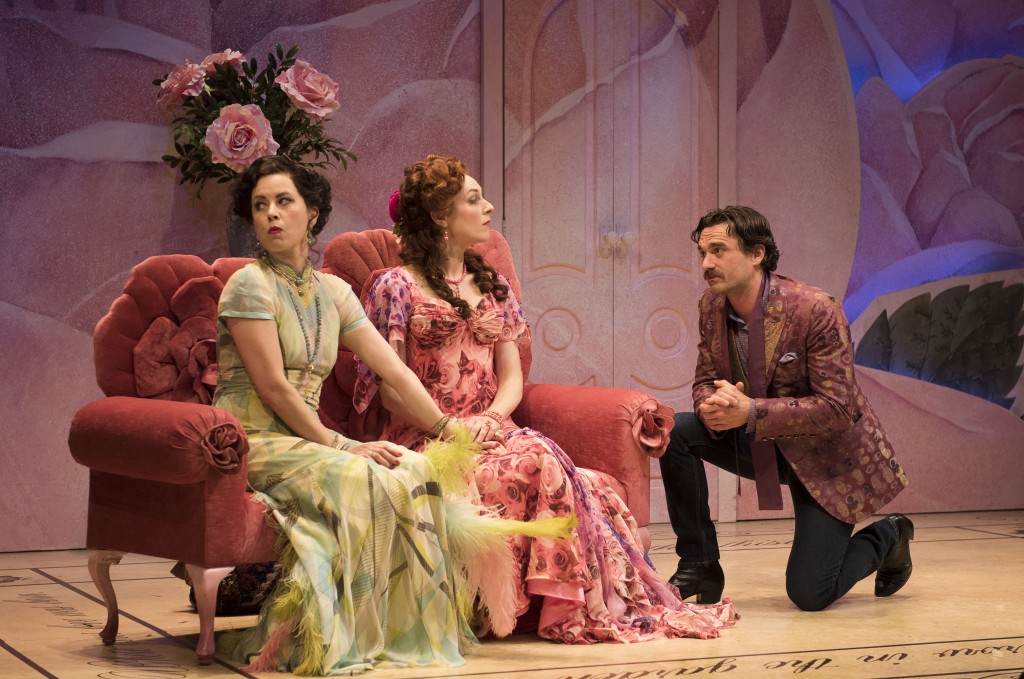 Love is in the air for Nicole Underhay as Belinda Treherne (left), Diana Donnelly as Minnie Symperson (centre) and Gray Powell as Cheviot Hill (right) star in The Shaw Festival’s squeaky clean presentation of ‘Engaged.’

It was Ben Franklin who once wrote ‘…in this world nothing can be said to be certain, except death and taxes.’ The U.S. founding father wasn’t too far off with this honourable speculation, his only oversight—intentional or not—was the omission of the word ‘marriage’.

That’s because anyone who has ever taken the union plunge will tell you it’s beautiful, it’s unpredictable, and sometimes laughably never meets its desirable expectations.

Only when Gray Powell’s pleasingly narcissistic Cheviot Hill, a man with money, position and education declares ‘Marriage is a risky thing; it’s like Chancery, once in it, you can’t get out of it, and the costs are enormous’ do ringless playgoers warmly acknowledge they’ve dodged an emotional and financial bullet.

W.S. Gilbert’s delightful snicker maker isn’t about or matrimonial mirth or nuptial nightmares. Rather, it’s a good ol’ fashion examination of the mysterious nature of relationship phobia and the awkward situations we find ourselves in when the heart wanders.

The fun is set in 1870 Scotland where the bachelor bad boy makes a decision to wed Minnie Symperson (Diana Donnelly). That is until he falls head over heels for Maggie McFarlane (Julia Course) who consequently is the apple Angus Macalister’s (Martin Happer) eye.

Yet Cheviot continues to hurry love with Belinda Treherne (Nicole Underhay) who is about to tie the knot with Major McGillicuddy (Ric Reid).

Multiple engagements are underway amid the frolicsome twists and turns with $1,000 per year up for grabs as a result of the super silly outcome.

Cast members bring such enriched flavours to their roles in this refreshingly different play for the Royal George Theatre. Director Morris Panych leaves his creative signature in various ebbs of the production to give Engagement the virility it needs to please the diverse theatrical palate.