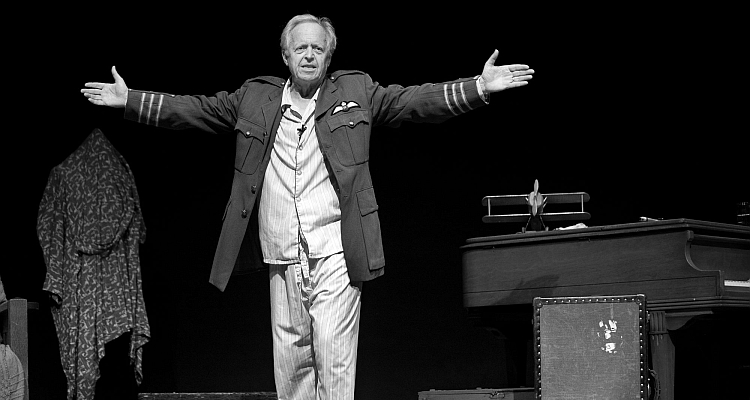 The legendary Eric Peterson makes a valiant return to the stage as sky trekking vanguard Billy Bishop in the Soulpepper Theatre Company presentation of Billy Bishop Goes To War.  The dramatic salute to Canada’s premiere fighter pilot runs until August 5.

Historians cautiously select their heroes on a case-by-case basis, which is why some truly magnificent people haven’t found their rightful place in the records of time despite their magnanimous contributions.

That, however, wasn’t the case with Canadian flying ace Billy Bishop, a 20-year-old Royal Military College misfit destined for expulsion after being caught cheating on an exam.

The narrative only widens considering he was elevated to celebrity status during WW I—and whose story is recounted in Billy Bishop Goes to War—receiving an excellent revival at the Young Centre for the Performing Arts in July where Soulpepper Theatre Company reunites original co-creators Eric Peterson and John Gray.

The production resoundingly salutes Canada’s flying ace, who decommissioned 72 enemy aircraft and became the first fighter pilot to attack a German airborne before it even got off the ground. Yet, the often amusing and sometimes visceral story bypasses the standard biographical design, instead focusing on the heartwarming theme of ‘local boy done good’ to secure audience allegiance.

More remarkable is the fact that the show’s narrative meticulously examines the mindset of the era, suggesting that it was perceived to be more favorable to die during combat than it was to fight another day. The central character’s hunger for survival is distinguished by a ‘life wish” whereby returning home wasn’t just an option, it was instinctively mandatory.

Peterson’s euphoric performance—and not just as Bishop but as more than half a dozen characters take shape in his capable hands—with Gray at the piano keys to provide intermittent singalongs.

Yet, it’s only when the reminiscing duo softly state that “Somehow it didn’t seem like war at all” does the impact of combat on a battle-weary survivor begin to fully reverberate throughout the venue.

Director Ted Dykstra is worthy of a theatrical medal of honor for his achievements in this show that returns for a yet another sortie. His workings allow scenes to bloom organically amid a composite set accented by a single chair, two model airplanes, and an assortment of trunks.

“War is no place for deep emotion,” affirms a subtly shaken Billy Bishop as the story descends upon its conclusion. A high in the sky pearl of wisdom from the front line of conflict doesn’t get any more polished than this.