BETWEEN RIVERSIDE AND CRAZY 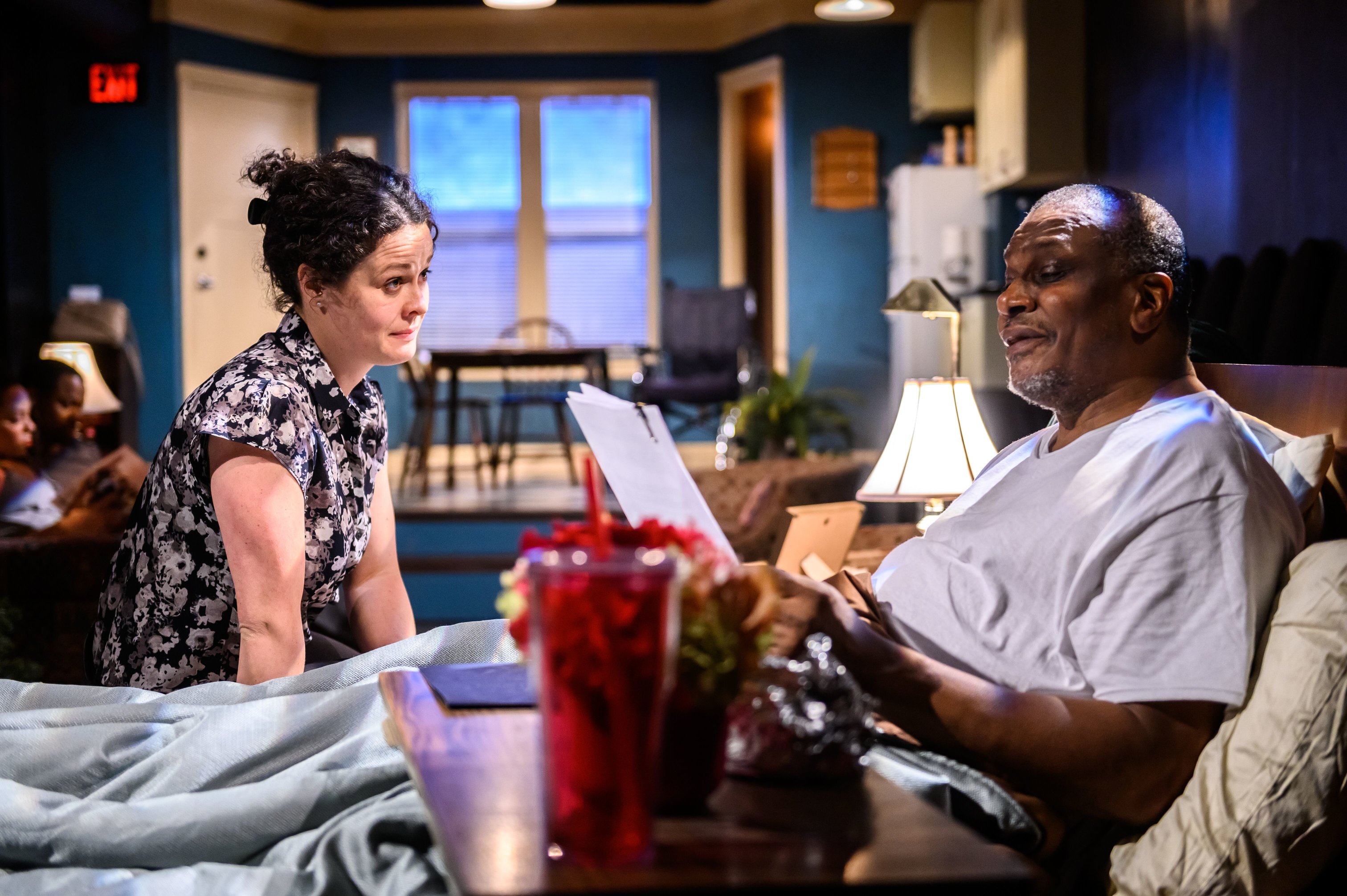 Why frown about the tragic past when there’s so much to look forward to in the opportunities of tomorrow thanks to Coal Mine Theatre’s astoundingly beautiful staging of Between Riverside And Crazy on now until December 15, 2019. Claire Armstrong as Detective O’Connor (left) and Alexander Thomas as Walter (right) are bound to do the right thing.

If you haven’t yet had the opportunity to bow down at the Stephen Adly Guirgis’ alter for phenomenal theatre, we can only assume that you’re either A) serving a life sentence at the Millhaven Correctional Centre for a crime you did not commit or B) you’re having difficulty navigating TTC’s Line 2 to Coxwell Station for what may be Coal Mine Theatre’s finest work to date.

Because if you’ve experienced the playwright’s previous works such as Jesus Hopped the ‘A’ Train, The Last Days of Judas Iscariot, or last year’s smash hit on the Danforth, The Motherf*cker With The Hat, you know the esteemed dramatist never cheats playgoers with half-hearted fables just to keep himself marketable.

Director Kelli Fox knows the deal going down in the Pulitzer Prize winning play Between Riverside and Crazy and with bona fide obeisance, she’s hand selected a cast that strikes it big in this mostly ticklish and intermittently arresting modern masterpiece.

Walter ‘Pops’ Washington (Alexander Thomas) is a mobility challenged retired police officer that took half a dozen bullets in his back thanks to a trigger happy rookie cop that raided an NYC after hours club eight years earlier. He hasn’t lost his sense of humour or endless generosity despite a long awaited City Hall settlement for the unfortunate event.

Junior (Jai Jai Jones) has a disappointing criminal past yet his optimistic father has high hopes that he’ll correct the error of his ways by entering parenthood with a clean slate now that Lulu (Zarrin Darnell-Martin) is carrying Walter’s grandchild.

Stepping away from the police force doesn’t mean cutting ties with caring colleagues such as Detective O’Connor (Claire Armstrong) and Lieutenant Caro (Sergio Di Zio) who stop by Walter’s modest $1,500 month low rent apartment to announce plans for a holy union and to show off the stunning diamond ring that will get them there.

Friendship, of course, naturally involves assumptions which can include sharing a bittersweet message the other person may not necessarily want to hear.

Money is sought, tensions rise, and hey, miracles can be worked on a sofa when a bit of sexual healing is performed in this eye-popping and absorbing tale of bad breaks and promising new beginnings.

Truth be told, here at Toronto’s premier digital theatre publication we’re at risk of causing a global internet outage if we shared in detail everything we loved about each performance including the tantilizing Allegra Fulton’s Brazilian Church Lady and the fanciful Sergio Di Zio’s promotion hungry, Dave, who struggles to put his money where his mouth is when push comes to shove with Walter.

But the grandiose tip of the hat goes to Alexander Thomas for his untouchable contribution as the dad of distinction who ‘knows sh*t’, Walter. The character flavour is singularly original yet so reminiscent of the highly memorable cranky sensibilities we’ve seen in characters from the late great Bernie Mac and the legendary Samuel L. Jackson.

There’s a lot of love to go around in this play it’s almost suffocating. Come for the wit and satire but walk away with a glowing heart.

In the end, that’s what unforgettable, altruistic story hero, Walter, would want most.