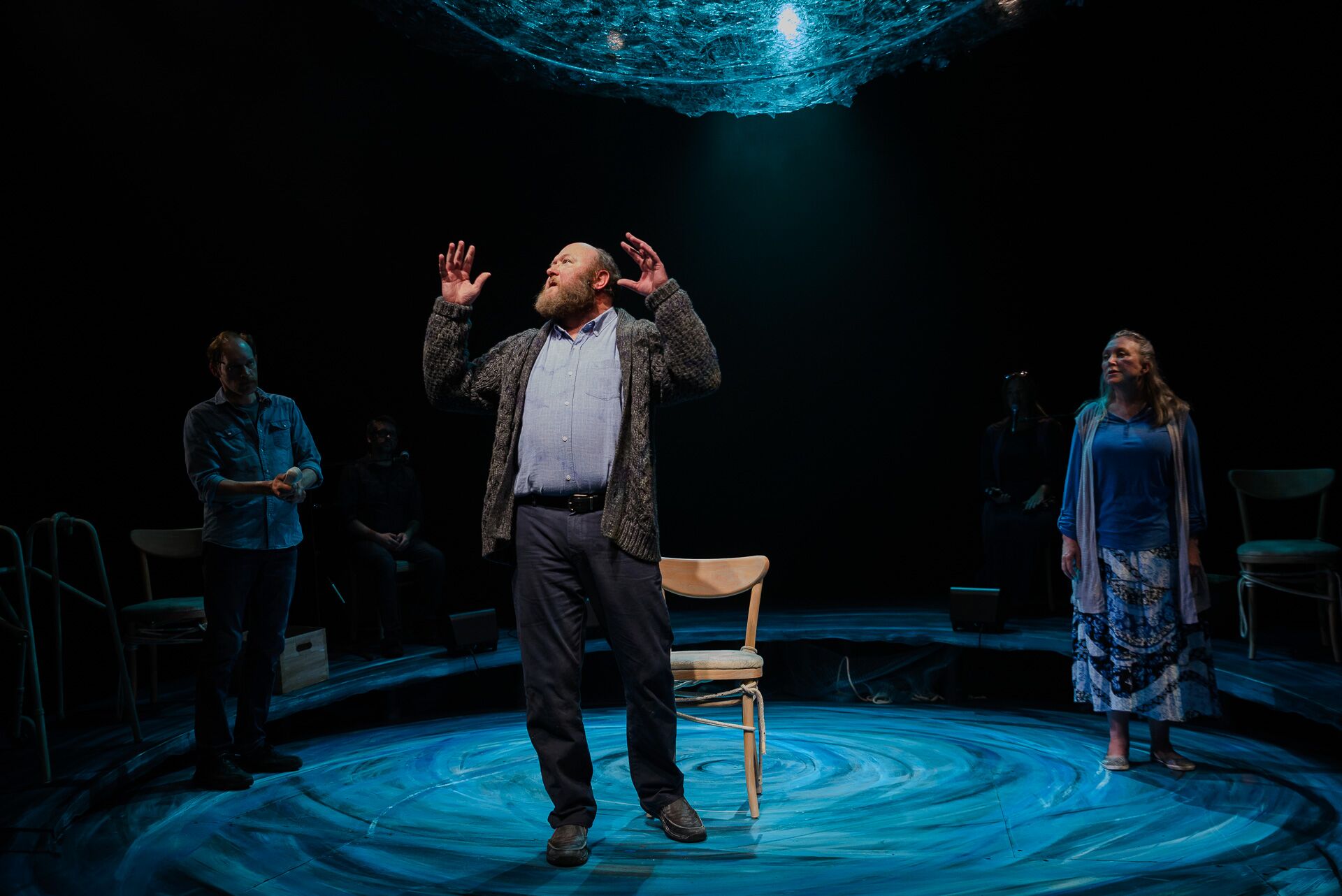 Holiday gift giving has come early at Factory Theatre where there’s no need for tinsel or mistletoes in Between Breaths on stage until December 8, 2019.   Steve O’Connell is ‘the guy’ who steps forward to save countless behemoth aquatic creatures when no one else would .

There are no doubt 1,000 different ways to tell a story and thanks to the creative team at Newfoundland’s Artistic Fraud Theatre, Between Breaths is spot on perfect in its visioning of a transplanted American on Canadian soil that made a difference when so few of us will ever be privileged with the same opportunity.

Palpable, poignant and bound to leave a permanent etch in your memory, the uplifting piece not only demonstrates that quality storytelling is in the DNA of East Coasters it drives home the point that no legacy is ever complete until long after a lifeforce departs from the body.

This dynamic drama unfolds backwards in time relying on a single circular set with a large disc hanging above a trio of cast members and Juno Award winning recording artists The Once distilling the sense of joy in its most concentrated form.

Audiences are introduced to John Lien, a frail scientist and university lecturer specializing in birds whose final days are consumed by dementia.

Playwright Robert Chafe time travels to an early era when the selfless do-gooder took it upon himself to free a wale from a collision with a fishing net before earning the reputation as the ‘Whale Man’ for freeing more than 500 humpbacks and becoming the pride and felicity of an ocean front nation.

What makes the central character the magnificent marine mammal liberator that he became is not solely his contributions to saving a species but his absolute respect and empathy for the livelihood of the cash strapped community snared on the other side—fishermen.

‘This thing that we’re doing, it’s about the size of things,’ insists the passionate soul that would go on to be awarded the Order of Canada.

Steve O’Connell as John gives one of the best performances of the year due to his extradentary connection to the text with ensemblers Berni Stapleton and Darryl Hopkins creating their own splash within this deeply heartfelt presentation that will no doubt make the list of this year’s Dora Award nominees.

If a person can’t change the world directly, there’s everything to gain and nothing to lose in reshaping the specific world you wake up in each morning.

And that’s one whale of an inspirational takeaway for all of us.

ORGINAL MUSIC The Once