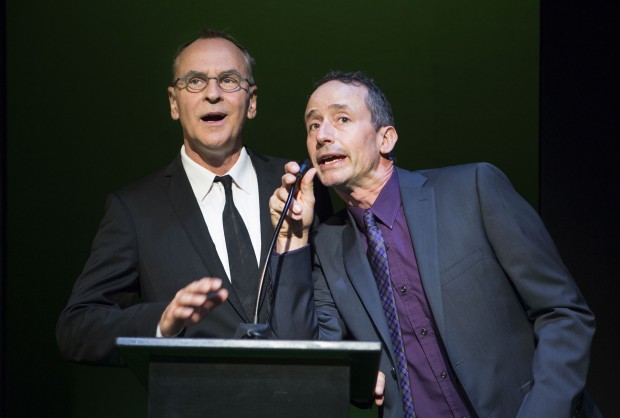 John Beale as Kyle (right) knows when to step in to keep a funeral event from going off the rails with Daniel MacIvor as Hamilton (left) not fully aware the impact of his message at a somber gathering. ‘The Best Brothers’ asks why life is so messy without ever providing a clear answer.

Season openers are a lot like family reunions when you stop and think about it.  It can be a highly anticipated event but you never really know what to expect.   Tarragon Theatre has gone and done the delightful by positioning The Best Brothers in the debut slot of its 2013/2014 series in this fabulously funny two hander bound by genuine kindred warmth.

Tragedy strikes quickly in this play packed a plenty of comical kick when siblings Hamilton (Daniel MacIvor) and Kyle (John Beale) get the unwelcomed phone call that there’s been a death in the family.  Freak accidents can happen anywhere at any time but the event surrounding to the expiration of their mother is howlingly grim.  Anger, sadness and the manically unexpected ensue when a funeral needs planning and assets require liquidation.

While the aftermath is anything but comfortable for the designer builder elder and real estate salesman younger, it’s their inability to connect on any level that makes this such a wildly funny emotional ride.

John Beal as the awkward Kyle scores smiles galore while harboring a secret in consideration of his family member’s feelings.  Daniel McIvor’s best moment as the persistently irritable Hamilton comes during an hilarious outburst at the visitation which narrowly edges his blistering rant towards a K-9 anti-companion that’s caused significant damage to his kitchen.

The Best Brothers draws attention to the timeless lesson that family is anything but perfect no matter what angle from which it is soulfully examined.   Yet a mother’s wisdom surrounding the importance of maintaining a healthy heart condition is was really drives home the point that all we really have in this world is each other.