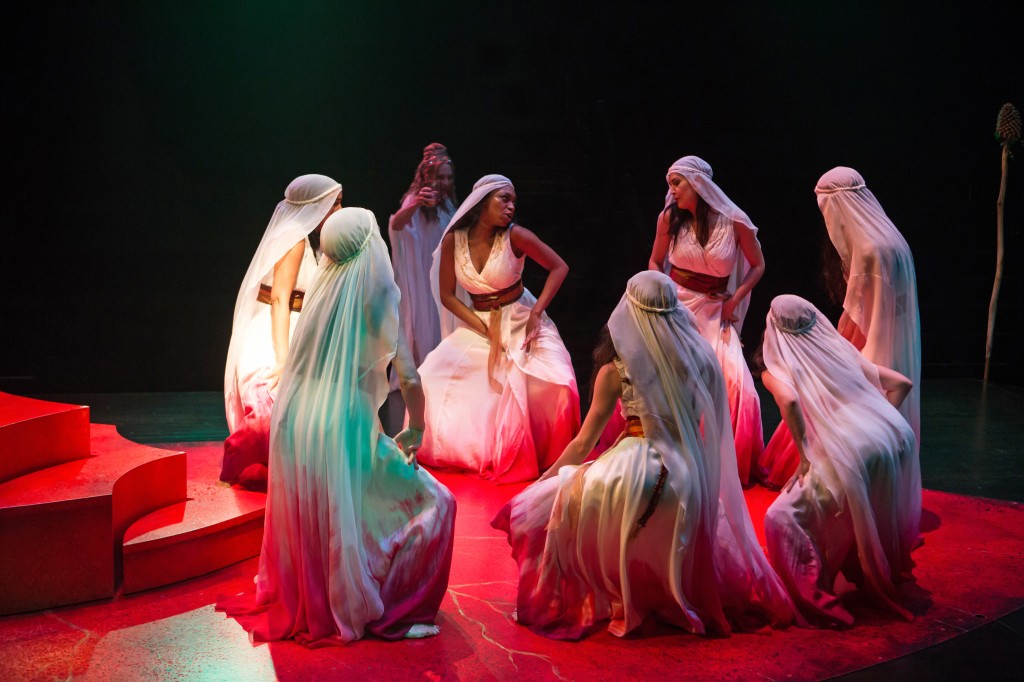 A dark, hedonistic tragedy with a visceral effects is the best way to sum up Bakkhai at the Tom Paterson Theatre until September 23, 2017. This latest vision perfectly dramatizes the eternal tensions between cerebral and sensual, male and female.

With ideas of balance and doubles combined with gritty immediacy, you have to love playwright Anne Carson’s new version of Bakkhai being given an alluring staging at the Stratford Festival.

Euripides’ electrifying tragedy is a struggle to the death between freedom and restraint, the rational and the irrational, man and god.

Director Jillian Kelley flirts with a cast of eight (plus an additional seven sultry multicultural gals fulfilling choir purposes) to carry the easy to follow storyline about Pentheus (Gordon S. Miller) banishing the wild, ritualistic worship of the god Dionysos (Mac Fyfe) only to have a stranger show up to persuade him to change his mind.

Playgoers can’t get enough of Mac Fye as the seductive, vengeful, sexually ambivalent god of pleasure in this teasing production that has a gory surprise for Lucy Peacock’s Agave.

Was Euripides celebrating or criticizing Greece’s faddish religious cults when he sat down to write this narrative? Hmmm…it’s really hard to tell.

Stratford’s latest reboot is similarly opaque in its take-home message, never quite overcoming the cultural remoteness of its source material. A rarefied stage spectacle nonetheless with superb performances all around and fantastic music to carry the show.