Annie Tuma – Moby A Whale of A Tale 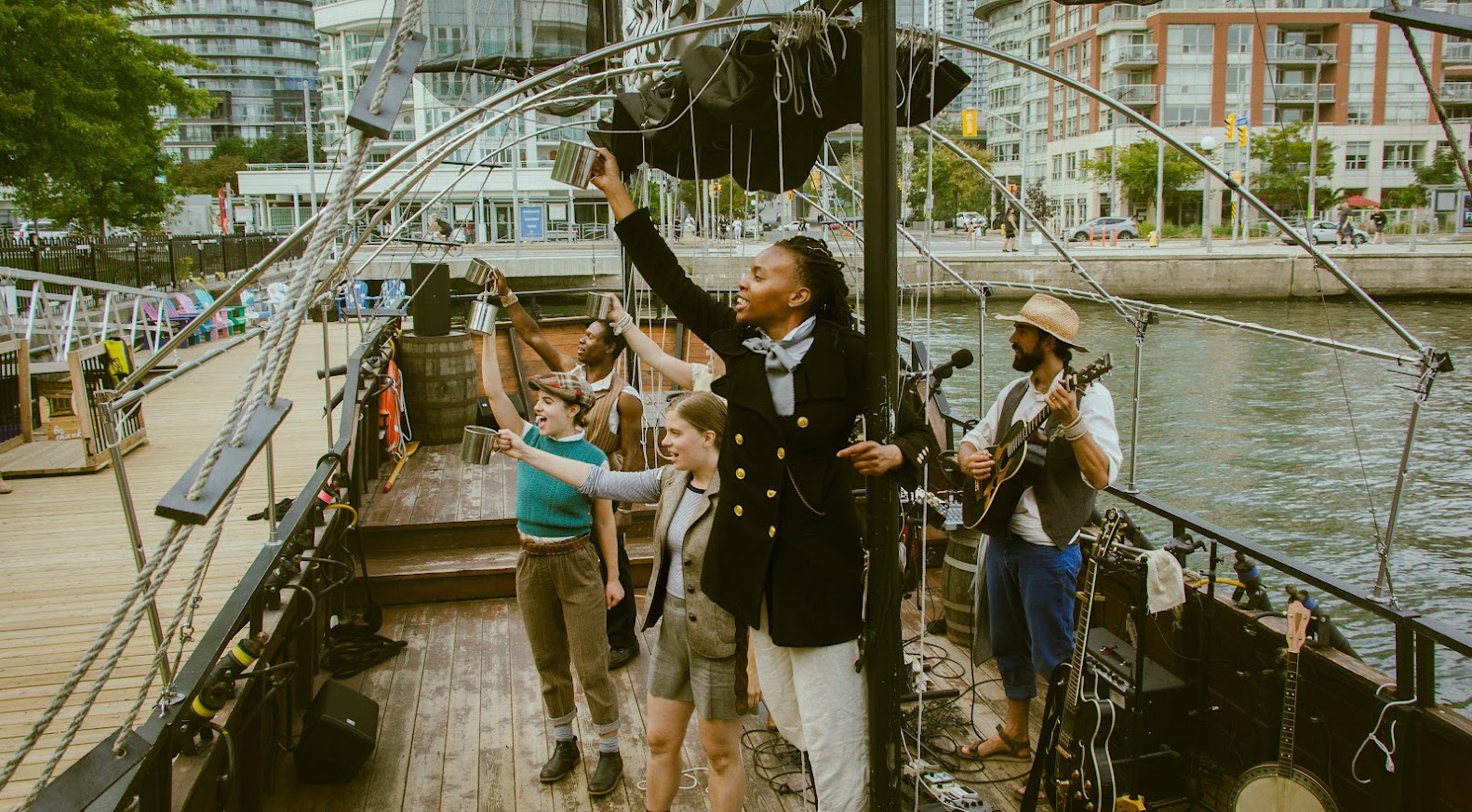 A show that reminds us to respect the planet.

That’s how actor Annie Tuma describes Fourth Gorgon Theatre’s MOBY A Whale of A Tale, where she plays the narrator, Ishmael, a philosophical muser in a family musical featuring 12 numbers that’s creating quite the generational splash aboard Pirate’s Life on stage (or deck) at Toronto’s Harbourfront at 585 Queens Quay West until September 26.

The Saint Paul, Minnesota native made her acting debut as King Arthur at the age of 6 and with artists such as Ani DeFranco, Bob Dylan, Carol King and Prince topping her list of songwriting favs, it’s no wonder she’s been able to turn novelist Herman Melville’s 850 page book into a 1 hour an 15 minute production with the help of folk musicians Moonfruits.

Miss Tuma’s affinity for classic stories is undeniable and giving ‘Moby’ a voice in this indelible entertainment event speaks to her sense of innovation and gift for memorable theatre experiences.

WHEN IT COMES TO PERFORMANCE, YOU ARE NOT WHAT MOST PEOPLE CALL A TYPICAL ARTIST. WHY SUCH A SPECIFIC PALATE FOR THEATRE STYLE?

I am drawn to movement based and site-specific pieces. I love works that use your whole person and space to tell a compelling story!

I think that’s what makes theatre its own beautiful medium. And I always love good dramatic roles!

MANY YOUNGER PERFORMERS ASPIRE TO ACTING GREATS CLOSER TO THEIR OWN GENERATION. YOU BUCK THIS TREND WITH WITH DEVOTION TO ONE OF HOLLYWOOD’S MOST CELEBRATED ACTORS, BORN TO CANADIAN PARENTS THAT’S HISTORICALLY KNOWN FOR QUIRKY, HEADSTRONG CHARACTERS ON THE BIG SCREEN.

Yes, Frances McDormand is definitely one of my favourites. Her career is amazing, from intensely hilarious characters to such dramatic real ones.

I would love to have a career where I get to sink my teeth into that many meaty roles in one lifetime. I would also love to write a screenplay one day!

GIVEN YOUR PAST WORK, WHAT TECHNIQUES DO YOU RELY UPON TO BRING LIFE TO FICTIONAL CHARACTER?

I feel like I often end up finding my character by exploring which emotions of theirs I connect with, and then which ones are totally opposite to me.

From there I start to figure out who this person is.

YOUR LATEST PROJECT—MOBY A WHALE OF A TALE—IS A FAMILY MUSICAL ABOUT AN UNLIKELY PROTAGONIST WITH A LARGE TAIL AND BLOW HOLE. WHAT’S YOUR FASCINATION WITH THIS SUBJECT MATTER?

Their role in the marine ecosystem actually provides about half the oxygen we breath! They play such a vital role in climate change, and so many of them are endangered.

I have never seen a whale in real life but it is definitely a dream of mine to go to Columbia’s Pacific Coast and see the hump back whales teaching their babies to swim for the first time. I love to travel though, and have definitely been on my fair share of tiny motorboat rides on the ocean.

I can say whole-heartedly that the ocean terrifies me as much as fascinates.

One song in Moby is inspired by a song I wrote while sleeping on the front of an over packed transport ship many miles from shore.

THE CREATIVE TEAM JUGGLES MULTIPLE THEMES IN THIS PRESENTATION. HOW DO THESE PIECES COME TOGETHER IN THE MUSICAL?

We hope that people walk away feeling humbled by the power of nature, and thinking of choices they make to help our environment.

And, of course, humming some of our sweet sea shanties!

HOLLYWOOD PRODUCERS WITH A DISCERNING EYE CALL YOU TOMMOROW FOR A ONCE IN A LIFE TIME FILM PROJECT. WHAT WOULD THAT INVOLVE?

You know, my dream would be to play Brittany Spears in her Bio-Pic!

Everyone my whole life has been telling me that I look like her. So I can’t wait until that day comes!