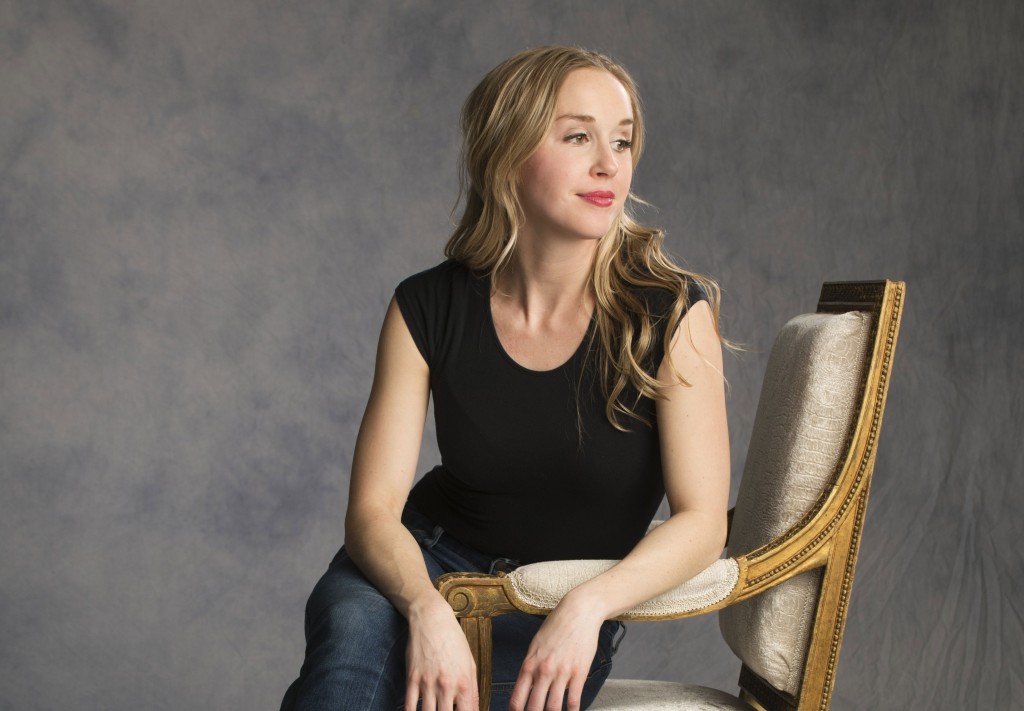 “Don’t pinch me because I don’t want to wake up!”

Words such as these certainly illustrate the level excitement a performer can have entering their 4th season at the Shaw Festival. Yet it is precisely how Kristi Frank is feeling this summer.

And chances are if you found yourself sitting next to her at Niagara-on-the-Lake eatery, you may be pleasantly surprised to be sharing the space with one of theatre’s next move and shaker on the festival country stage.

Modesty goes a long way in the show biz. Try as we may to drag out a skeleton or two from the closet, the girl next door who can be seen in 2016′s Our Town at the Royal George Theatre and Sweeney Todd at the Festival Theatre is about as wholesome as they get in a ’20 Questions With…’ exclusive.

And for the record, playgoers wouldn’t have her any other way.

According to a recent home video pulled from the archives of my childhood, caterpillar eyebrows included, I would have to say Celine Dion. She has it all: the pipes, the moves, and she is bilingual to boot. Elle est excellente!

Who were your childhood heroes?
I don’t think I would have admitted it at the time, but it was likely my sister.  She is two years older than myself and I was a bit like her shadow.

Did you play sports as a kid?
I was fortunate that my parents put me in a variety of activities growing up so I got a chance to try quite a few things.

Unfortunately keeping my eyes open while an object comes flying at me doesn’t quite trump my instinct to cower behind my hands and close my eyes. That said, I didn’t last long on most team sports.

My claim to fame was probably making the Grade 9 volleyball team… there must have been a type-o on the list.

I am happy to report that there has been some progress in my “keep your eye on the ball” troubles. Over the last three years I have been a member of the Shaw cricket team (we play Stratford each year) and they have patiently taught me how to do just that.  Cricket, cricket, cricket! Balls, balls, balls!

Were your parents strict?
I do remember when I made poor choices that their disappointment in me was far worse than no TV for a week or being grounded. Nothing my parents ever did seems strict now, it was all out of love.

But now that many friends have children, I see how everything parents do is for the best of their babes.

What posters did you have on your bedroom wall growing up?
Hmmm, probably something I picked up at the Scholastic book fair. Those were highlights of the school year.

Come to think of it, I remember my sister’s posters better than my own. She had a unicorn on her door, a ballerina poster and the handsome fellas from New Kids On The Block. I spent more time sneaking into her room, sleeping on her floor or listening at her door than hanging in my room.

In my dream world we knocked down the wall between our rooms and had a giant Full House-sized bedroom, that way her posters could have actually been in MY room.

What was your nickname in high school?
My all-time favourite nicknames came from my paternal grandmother Dolly Frank. She had a new name for me every time we met: Kristibelle, Krickles, Shnugglyputz, and the list went on. She adored us and we her.

What was the first concert you attended?
Mr. Dressup.

A decade later I saw the Smashing Pumpkins in Saskatoon. My thirteen-year-old-self felt like such a grown up going to the city without my parents and seeing a famous band play in a huge stadium.

What was the first job you ever had?
I bopped around a few jobs in between dance classes and can’t remember which of these actually came first. I assisted my teachers at the dance studio for the younger classes.

There was a brief stint at McDonalds for a few months before summer dance camps started. It was for the best that it only lasted that long since I have a terrible affinity for french fries.

Another memorable job was working at a plant nursery in town.  Since I knew little of plants or how to care for them, I sat on an overturned pail and watered plants or picked weeds all day. It was fabulous. That combined with my mother’s green thumb is probably why I could spend all afternoon in a greenhouse now.

Have you ever been fired?
No. Or, if I have I blocked it out and replaced it with common crossword puzzle clues, like obi or asp.

Who was the first person you were sexually attracted to?
Tough question. It depends which person is reading this—Devon Sawa or Jonathan Taylor Thomas.

How old were you when you had your first kiss and what do you remember about it?
I would say I was around 8 or 9, it was a bright, beautiful day and Joey McIntyre looked at me from my sister’s poster and said these lips are yours. So I smooched him, no tongue of course.

My first sans paper kiss was a quick peck mostly on the nose because I was so nervous. I was getting off the bus from our grade six trip to the French conference and he had to stay on since he lived in a town 45 minutes away. Across the universe then. He thought I was funny during improv and I thought he was a sensitive dreamboat. Swoon.

What do you remember about the first time getting drunk?
Do people usually remember that?

I think this is another situation where crosswords have replaced this information. But if I had to guess, it would have involved some type of sickly sweet cooler with my besties.

What is the hardest thing about being a woman?
Wow, that is a huge question. I’m going to spin it and instead focus on something that inspires me.

I am fortunate to work with and know many creative and powerful women filled with courage and confidence. They are bold enough to take the helm of a ship or jump off and build their own boat if need be.

They inspire me to be a woman who owns the space she is in. It is something I have to remind myself of at times.

What did you believe in at 18 that you wish that you’d believe in now?
I thought that a banana nut muffin was not the disguised cake that it actually is. I know you muffin, I knooooow you.

What is the best advice your parents have ever given you?
Don’t leave any fish guts out after filleting your fish or the bears will come.

What have you done that you will never do again?
I will never get married again. I got married this fall to my wonderful hubby and that’s it for me.

What is the best lie you ever told?
Hands down my best lie was when I told a friend that my Great Uncle was Frank, from Frank’s RedHot sauce fame.

There had been a big family feud over the recipe and after a lengthy legal battle no one spoke to him again. I had a bottle on the table because I loved it so much despite the bad memories.

I’m pretty sure my friend might still think I should have been a millionaire. I’m not sure if the truth got out because we started eating. Oops.

What is the scariest thing that ever happened to you?
Running away from the babysitter’s house. It sounds small but I can still remember it so vividly.

I was the most terrified the moment right before I made a run for it, deciding if I should stay or go. I was five and hadn’t had someone spank or scream at me before.  And when my babysitter went outside yelling at another kid in her backyard I was afraid she would do the same to me. I remember staring at the front door and back at her. Finally, I just darted.

A kind neighbor walked me to the school where my mom taught and we found a new sitter.

You’ve been exiled to an island with no other inhabitants but permitted to bring one book, one CD, and one DVD.  What will this list include?
Book: The Poisonwood Bible, Barbara Kingsolver. It was my first young adult read and I have yet to take another look at it. With all this time on my hands, it seems like the perfect beach read.

CD: The Light in the Piazza Soundtrack

DVD: BBC Planet Earth series. It comes in one box so I counted it as one. Heck, I’m sure it would fit on a flash drive. Can I bring one of those instead?

If someone made a movie about your life, whom would you want to play Kristi Frank?
Dolly Parton, it would be a country musical bio-pic.