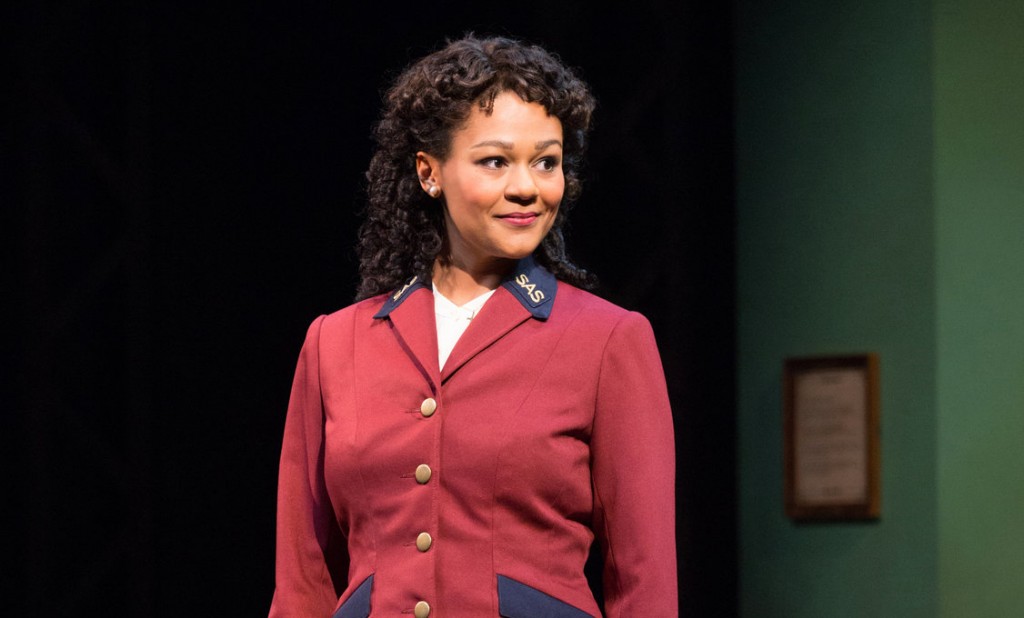 If you’re a firm believer in taking chances in the pursuit of what matters most in life, get ready for a most rewarding musical theatre experience this summer as Guys and Dolls has audiences humming along to ‘Sit Down You’re Rockin’ The Boat,’ ‘Marry The Man Today,’ and ‘Luck Be A Lady’ long after the lights go dark at Stratford’s Festival Theatre.

Alexis Gordon continues to step into the spotlight, this time as headstrong Salvation Army Sargent, Sarah Brown (as seen above), a character equal parts bossy and stubborn before undergoing a transformation that only love can trigger.

She’s an actress as grounded as the rest of us. As we hunt high and low for lesser known trivialities, Miss Gordon is never short of surprises.

I always wanted to be a teacher. I liked the idea of helping and sharing with others.

Which still relates to life in theatre, I believe.

My mom was and still continues to be my hero.

She inspired me to find peace in stories and books. She introduced me to musical theatre by listening to cassette tapes in the car and she taught me that I can do anything with hard work and perseverance.

In such a trying business that I’m in, it’s important to find both joy and determination every day.

What sports did you play as a kid?

I played defense and had such a giant kick that my mom would say “boom” from the side lines every time I kicked the ball. I remember being mortified to later find that out.

As Seventh-Day Adventists, my parents were fairly strict. So we grew up adhering to rules including no-caffeine, no-pork or shellfish, no-television on Sabbath (Saturdays).

Now I can’t live without coffee or red wine but I don’t look back with frustration for those limitations.

It just taught me to find something else to do or enjoy.

I didn’t really understand the posters-on-the-wall thing in my teen years.

I think I had a wall of sticky-tacked magazine rip outs, but I don’t recall being particularly passionate about the bands or actors.

I loved my big black and white posters of Marilyn Monroe at Grand Central Station and Audrey Hepburn in Breakfast at Tiffany’s.

I didn’t really have nicknames other than a few close friends calling me “Lexi” or “Lex.”

I worked at Original Kids Theatre Summer Camp in high school and they print your nickname on the back of your camp t-shirt.

One year my boss decided to expand my name on my shirt to read “On Fire” (a tip of the hat to rockers Alexisonfire).

The one and only concert I have been to was Coldplay in Toronto.

I remember a bunch of yellow balloons/balls being released when they introduced the song “Yellow.” It was great!

I really need to go to more concerts.

Other than a handful of babysitting gigs, my job was working at Original Kids Summer Camp in London. It was ridiculously fun.

I still have good friends from those days.  I think we had more fun than the campers, making up sketches, camp games, and of course all the parties.

Never have I been let go from a job.

Either way they asked me for my manager’s name (my mom does not look like me at all) and number, and I happily told them but have no disciplinary action was taken for obvious reasons.

I remember for the longest time I was absolutely in love with Bert, played by Dick Van Dyke, in the movie Mary Poppins. Does that count?

I was probably 7 or 8 and so awkward and uncomfortable that I’ve replaced it with something else in my head.

I used to hate the taste of red wine and loved peach flavoured schnapps.

I just remember saying “Who could enjoy this stuff?!”

For the record, my taste buds have now been reversed giving me an affinity for red wine but not for peach schnapps.

Paying more for razors at the drugstore!

I suppose I wish I still believed in a shinier or brighter world.

I actually consider myself an optimist and believe in kindness and love before anything else.

I guess there’s just a level of inexperience, innocence and lack of knowledge when you’re younger that you wish you could still maintain at moments when the world seems heavy.

Change is inevitable.  Don’t let it shake you—learn to accept, appreciate, and change with it.

Consume two bottles of $2 Trader Joe’s wine in one night.

“I love rare steak.”  The irony being I’m now a vegetarian.

Every audition is pretty terrifying.

You’ve been exiled to an isolated island with no other inhabitants but permitted to bring one book, one CD, and one DVD.  What will this list include?

I would bring my copy pf “Portable Dorothy Parker” as her wit and humour in her poems, short stories and reviews, would get me through.

My CD would probably be a mixed songs of musical theatre, jazz and classical music. This way I could belt out some “Wicked” but also cry to some Nina Simone, and then also have some numbers with just classical orchestrations to listen to.

For my DVD choice it would have to be Center Stage or Before Sunrise so Ethan Hawke could keep me company.