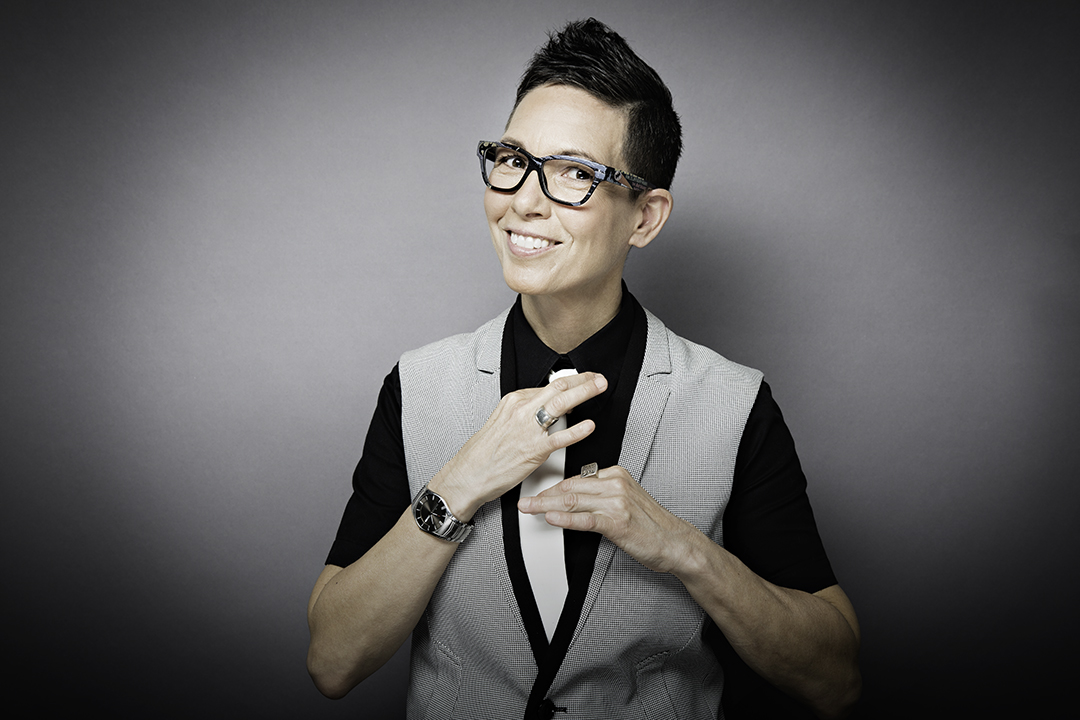 With the 2021 calendar down to just four more pages, anticipation is growing for Buddies in Bad Times interactive ARTATTACK! happening Thursday, September 23 at 7 pm.

The highly celebrated and most outrageous annual art auction in the city promotes the work of over 50 visual artists that can dress up any dwelling space with style and grandeur while raising an eyebrow or two for any in-laws you can’t seem to find that perfect gift for the holiday season that’s just around the corner.

Tickets are available at artattack.buddiesinbadtimes.com/ and attendees are reminded that proof of COVID-19 vaccination is required.

This year’s host, comedian Elvira Kurt, describes her emcee role as a ‘genuine treat.’ She’s a laugh master that feels most at ease within the walls of the historic Alexander Street venue and if you don’t think she has a few surprises for patrons at this month’s event, do think again.

It was impossible to let this year’s event go by without inviting the comedy crusader to sit down and go where few artists have gone before in a dialogue exchange.

WHAT DID YOU WANT TO BE GROWING UP?

When I was a little kid, I loved the Peanuts comics.  I related to all the characters in some way but I totally vibed with Snoopy for how he’d drive Lucy to distraction with his happy dance in the face of her crabbiness. It mirrors my own relationship with my mother, both back then and to this day.  So, I know I always wanted to be an artist, specifically a cartoonist at first and later, an animator.

As an only child, I also spent countless hours performing into the bathroom mirror with a hairbrush microphone, influenced by all the ‘I Love Lucy’ and ‘The Carol Burnett Show’ I was ingesting. But when 13 year old me first saw Gilda Radner on SNL it pretty much sealed the deal on what I knew I had to be.

I went through the motions of following my parent’s wishes but after graduating U of T with my BSc., I decided to finally do what I wanted.

By then, I had already started sleeping with women on the down low, so to keep my life-altering streak going I shored up the courage to try open mic night at the only stand up comedy game in town. All it took was one time and I was hooked.

Suddenly, I was on the same stage as the great Mike McDonald, who I’d seen only two years earlier when I was high schooler. It was a  perfect fit for this closeted, happy-dancing oddball.

WHO WHERE YOUR CHILDHOOD HEROES?

Snoopy, Linus and Charlie Brown. Then, Bugs Bunny, who to this day, remains one of my all-time queer heroes.

The rest of the list would be women. I admired all the funny women I’d watch on TV but the real sheroes, the ones who I leaned on to shape my sense of self until I learned how to do that work for myself, are all the women I’ve met and worked with along the way.

DID YOU PLAY SPORTS AS A KID?

I have a lot of energy and a bit of co-ordination so I did all the things all through school: softball, volleyball, and gymnastics, I loved them all living my best tomboy life.

My parents put me in figure skating which I disliked because of the gendering. I loved doing jumps and spins but loathed having to wear tights and a stupid skating dress.   Getting those dance badges nearly did me in. I just wanted to skate fast, in my pants, with the boys.

When I finally became the boss of me, I blossomed as a sporty dyke, playing football, soccer, rock climbing, skiing which I still do now and enjoy in both seasons!

WHAT POSTERS DID YOU HAVE ON YOUR BEDROOM WALL GROWING UP?

I was allowed only one which appeared on the back of my bedroom door. It was the only space in the entire house, aside from the cork board above the desk in my bedroom, where I could express myself.

It’s the classic ‘70’s “Hang In There, Baby!” kitten clinging onto a clothing rod poster. Got me through my teen years.

After that, I mostly hit the road for the next couple of decades so most of the art I took in was a combo of whatever my latest girlfriend was into and whatever the road offered: billboards, hotel room masterpieces and the like.

WHAT WAS YOUR NICKNAME IN HIGH SCHOOL?

I was called Elvie, or Elf and the hilarious at the time, reverse variation, Fle.

Between the Oak Ridge Boys and the Mistress of the Night, having the name ‘Elvira’, has always been a mixed bag.

Mostly, I have to hold people’s discomfort when they pronounce it with a long ‘i’ and I correct them but as far as burdens go, this is as trivial as it gets.

Call me ‘Kurt’ and then call it day.

WHAT WAS THE FIRST CONCERT YOU ATTENDED?

It was the Beach Boys at the CNE.

One of the guys in my friend group, Greg, was a huge fan and we’d go see them there every year. I also remember, as a fan of The Police, going to the CNE’s ‘Police Picnic.’

That’s where I first heard an obscure group called Talking Heads which blew my mind. I hit Sam The Record Man the very next day and just like that, expanded my collection of 8 tracks.

WHAT WAS THE FIRST JOB YOU EVER HAD?

My first job was at the Hungarian House on St. Clair W. during Caravan, which, back in the day, was this week long city wide multicultural festival.  At the time, it was so exotic to visit the whole world without leaving Toronto!  It even came with a passport to collect ink stamps!

I worked in the food area, bussing tables ‘for Hungary’ but that’s secondary to my favourite part of this memory. One menu item representing our traditional cuisine was the Hungarian version of fried bread. My people call this beloved greasy treat, ‘lángos’, pronounced ‘lahn-GOASH’, which roughly translates to ‘of flame’. You know it today as the ‘Beaver Tail’.

For whatever reason, the brain trust of the Hungarian House at the time rejected the original name and instead sought to create one that would be more evocative of bread dough dipped in boiling hot oil, seeking a flashier name that might be more appealing to Anglo visitors. So they settled on “Hun-Flaps”. Yep. Best worst name ever. And I laugh every time I think about it.

HAVE YOU EVER BEEN FIRED?

Worse than being fired, I have not been ‘asked back’ more than once.

WHAT IS THE HARDEST THING ABOUT BEING A WOMAN?

IF YOU HADN’T PUSHED FORWARD FOR A LIFE IN ENTERTAINMENT, WHAT OTHER CAREER COULD YOU ENVISION?

But where I use recorded history as the starting point for uncovering a fuller picture of the past, complete with alternate versions of events, differing perceptions and realities by heralding unsung voices, lives and lived experiences.

WHO WAS THE FIRST PERSON YOU WERE SEXUALLY ATTRACTED TO?

HOW OLD WERE YOU WHEN YOU HAD YOUR FIRST KISS?

After school, but in the dingy, dilapidated garage in back of someone’s house. We were playing kissing tag. I caught a guy and we kissed but I was pretty oblivious to any attraction, I was there mainly for the tag.

WHAT DO YOU REMEMBER ABOUT THE FIRST TIME GETTING DRUNK?

That was at a high school party in a house where the parents were away. They had a pool, which to me was/is the height of luxury.

I ended up in a chair, in a corner, falling asleep.  People made fun of me, I remember that much.

Eventually I woke up with the party still raging.  I must have thought this is how you party because it became my M.O. for the next 30+ years.

WHAT DID YOU BELIEVE IN AT 18 THAT YOU WISH YOU STILL BELIEVED IN NOW?

Having kids will be so fun!

WHAT IS THE BEST ADVICE YOUR PARENTS EVER GAVE YOU?

WHAT HAVE YOU DONE THAT YOU WILL NEVER DO AGAIN?

Jump off the roof, any roof, on a dare.

WHAT IS THE BEST LIE YOU EVER TOLD?

I lied a lot as a kid, at my parent’s insistence, because, to paraphrase them, our lives are nobody’s business. I guess if, like them, I’d escaped a repressive communist regime in my teen years that would have made more sense to me than it did at the time.

Mostly though, it just confused me and the lies I told about our family always made my stomach ache even as it taught me to think quickly on my feet.

It wasn’t until I was in my twenties with this one girlfriend, who I’d kind of mock for valuing honesty, that I saw she might have a point. I’ve been clawing my way back from the dark side ever since.

WHAT IS THE SCARIEST THING THAT EVER HAPPENED TO YOU?

IF SOMEDBY MADE A MOVIE ABOUT YOUR LIFE, WHOM WOULD YOU WANT TO PLAY ELVIRA KURT?

Younger me: Calvin. Older me: Hobbes.

YOU’VE BEEN EXILED TO AN ISOLATED ISLAND FOR 5 YEARS WITH NO OTHER INHABITANTS BUT ALL MODERN CONVEINANCES SUCH AS ELECTRICITY AND MEDIA PLAYERS.  WHICH ONE BOOK, ONE CD, AND ONE DVD WOULD YOU BRING WITH YOU?

The Complete Calvin and Hobbes because I never get tired of re-reading them.

A CD choice is harder because my musical taste is so varied.  On an isolated island I’d want something that’s comforting, something I could sing along to and, if I shut my eyes, would transport me back to civilization.  I’d choose the Supremes Live in Vegas from 1970. It’d be like a night out and then I wake up in the tropics—bonus!

For my DVD pick, I’d want ‘Close Encounters of the Third Kind’ because it’s my all time favourite.  But I should take ‘It’s A Wonderful Life’ because then even as a castaway, I’d always have something I keep meaning to watch but never seem to get around to.