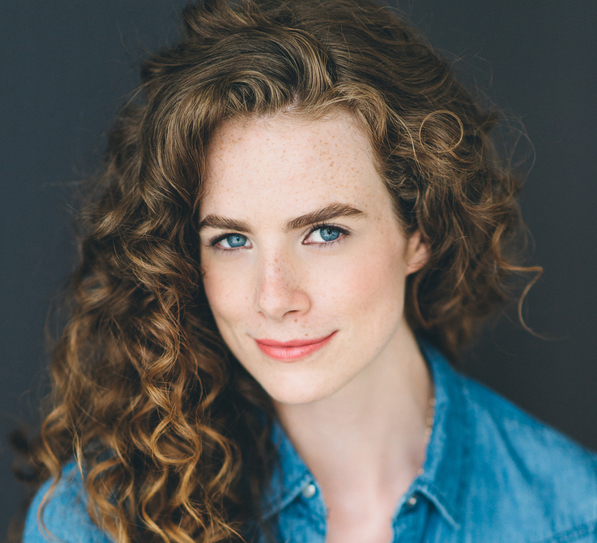 Let it be said that funny gal Clare McConnell is by no means an advocate of inflicting self-abuse in the workplace despite the frequent temptation to pinch herself.

And who wouldn’t when your parents plant the seed of absurdist theatre in your head at an early age only to wake up and find yourself laughing until your stomach hurts for a living in the Second City’s touring company where improv trailblazers such as Gilda Radner and Rachael Dratch have come before you?

Fresh off a successful season playing an iconic Klingon in CBS’ Star Trek: Discovery, the Calgary native is showing no signs of losing her sense of humour even with a prosthetic forehead in front of the camera.

I wanted to be too many things. At first I was convinced I’d be a chef, then a singer, then a criminologist, then a photographer.

What finally made me land on acting was that it was only time I really loved doing the grunt work. Eeven the gruelling parts like the memorization and the endless auditions felt exciting to me.

My dad had a box set of Beyond the Fringe, which was a satirical British comedy troupe from the 60s. I used to put that on to fall asleep to at night.

I had a lot of their stuff memorized way before I was old enough to understand what they were talking about, but I loved how dry and bizarre their style was. I’m still a huge fan.

Did you play sports as a kid?

I attempted many sports, but I grew very quickly and did not know where my limbs ended.

I was about six feet tall by the time I was fourteen so I would always get asked to try out for my school’s volleyball and basketball teams. I was reliably disappointing.

My parents enrolled me in a self-directed school when I was 3 years old, so I became pretty independent.

They didn’t really have to lay down the law because I was born a 40-year-old woman who just wanted to do watercolours by herself and listen to Bach.

I stalked Jane Goodall to get her to sign a poster of a chimpanzee.

I saw her speak at an event when I was eleven and found out that she was staying at a hotel down the road from my house, so a couple of friends and I went and talked to the chef through the back window of the place until he finally told us when she was checking out.

We all got up at 5 a.m. the next day and stood outside, Sharpies in hand.

She was very gracious and magical, and gave everyone a hug. What a woman!

According to this D-list celebrity website, my nickname is Clare: http://bit.ly/2F50tOM

The first show I ever went to without my parents was an Atmosphere concert.

He’s an okay socially conscious rapper that my friend Mark and I really liked in high school.

I had a huge crush on Mark at the time and was convinced that this would turn in to a date, but I got a firm “see ya at school, dude” at the end of the night.

I stopped listening to Atmosphere after that, but Mark is still one of my best friends, the dummy.

I was a babysitter.

It was my first night on the job and the kid got herself locked in the bathroom by accident as soon as her parents left. We couldn’t figure the lock out so I just sat there and slid salami under the door for her for three hours.

She gave me a rave review and I was invited back the next week.

I was let go from a fine dining restaurant.

I made up tasting notes for wines I knew nothing about, and messed up orders at least 50% of the time.

They made a good decision. I am proud of them.

A lot changed for me when I saw Johnny Depp in Chocolat.

I had been dating my first boyfriend for two months and we still hadn’t kissed.

Then finally one night he gave me a quick peck on the lips. I said “Thank you very much,” and he left. I was overjoyed, but he (understandably) didn’t think it had gone well.

It was another month before we discussed the first kiss and agreed that it was very nice. Then we made out for a year and a half. It was the best.

The first time I got really, truly wasted was on my eighteenth birthday.

My brother’s present to me was that he would pick me up from wherever I was that night, no matter what time with no questions asked.

He showed up to my friend’s place at 3 in the morning with a bag of plain chips, a bottle of Gatorade and a bucket.

It remains the most thoughtful gift I’ve ever received.

I didn’t used to be, but like almost every woman you know, I’ve now been followed, yelled at and accosted enough that I have my wits about me at all times.

It’s not how I’d like to feel when I walk down a street at night, but it’s not optional.

My dad got very sick when I was in high school. As a result, I was pretty jaded at eighteen.

I’ve gotten more optimistic over the years and I’d like to go back to my grade twelve self and tell her that the world is a good place to be.

Even though it’s not always a kind place, it’s a party worth sticking around for.

They always pushed me to try and do things I wasn’t sure I was capable of.

Reply “yes” when a hairdresser asks, “Do you trust me?”

The first (and last) time I didn’t pay to get on a streetcar, the fare officers got on and I faked a dramatic teary phone call and ran off before they could catch me.

When I was nineteen I was mugged by a woman in Barcelona and got into the first physical fight of my life.

The cops came by and I ended up going to Spanish court.

You’ve been exiled to an isolated island with no other inhabitants but permitted to to bring one book, one CD, and one DVD what will this list include?

I think Hugh Skinner would be great.

He has a gift for playing highly emotional people who take things far too seriously, which is my nature.

I would want Betsy Sodaro to do the voice of my inner monologue though. She’s a fearless goof and I love her.