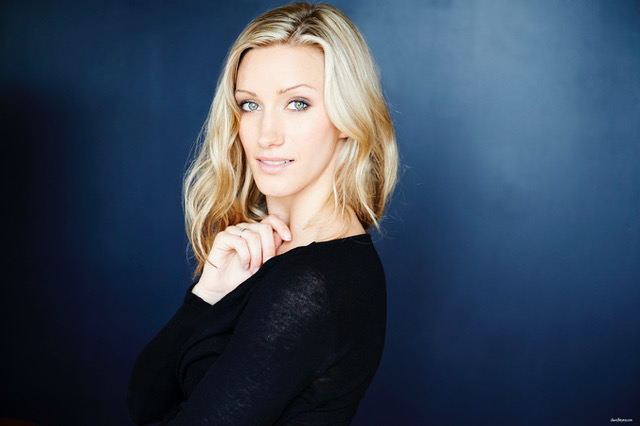 When a festival performer winds down the summer with one of the hottest musicals brimming with beautiful, moving song and dance numbers, it’s a welcoming event to see them take a breather.

Alexandra Herzog has been swept away by the experience playing Mimi, a scrappy and tough Hot Box Girl in Guys & Dolls, a story that suggests life is by no means what you expect it to be.

Few of us seem to get where we truly want to be without beckoning to words of inspiration from our heroes and taking a wee bit of risk along the way.

Yet we’ll leave it up to one particular blonde Stratford stage Doll to put it all into perspective.

A politician! Can you believe that?

I loved going to the elementary school polling station with my mom to cast her ballot and then rush home to watch the results come in on TV.

I guess this made sense to me because I thought I would be good at speaking on behalf of my neighbourhood… at age 6!.

If that fell through, selling five cent candy outside the house always went well for me.

Hands down, my mom!

She was a single mom and raised me with the true sentiment that ‘it takes a village.’  She made sure I had diverse role models and always felt extremely cared for, even if she couldn’t always be there.

The woman never ceases to amaze me, she recently went back to school in her 60’s to get a Masters Degree for her retirement career.

What sports did you play sports as a kid?

I had three bouts with sports.

1) I was enrolled in soccer, but instead of following the ball, I’d hold hands with one of the girls and skip around the field and pick the weeds. But I couldn’t get enough of the McDonald’s orange drink we got at half time.

2) Skating. All the kids graduated into either speed skating or figure skating. I figured since I was a dancer, I’d be the most obvious choice to graduate into figure skating.

3) High school volleyball.  I had to leave a practice early to go to dance (obviously) so I did ‘reverence’ to the coaches (the bows you do traditionally at the end of the ballet class) because I thought that was just the way you leave a room.  Totally embarrassing to curtsy to your volleyball coaches in the middle of the high school gym by yourself—don’t do it.

I think my mom was secretly strict.

She had me in so many activities, I didn’t have time to misbehave.  I remember her saying “You don’t want to be one of those kids who hangs out at the 7/11.”

I had ballet posters.

Royal Winnipeg Ballet had a gift shop and I’d get to choose a poster at the end of their summer school. I loved Evelyn Hart.

Only my mom calls me Alexandra and used to gently remind my friends that my name was Alexandra when they’d call the house for ‘Alex.’

The Rolling Stones! Coolest. I was about ten. I still have the ticket saved. I remember going as a family and sitting in the very last row of the Winnipeg stadium and freezing our butts off. But it was so cool.

I started teaching dance when I was about 14.

But prior to that, my aunt would pay my cousin Tegan and I to dig through her big, beautiful garden and search for slugs.

Every slug we found we made 5 cents! Gross as they were, I think I got at least over two bucks.

Yes. I booked two weeks off at a restaurant job and I was never put on the schedule again.

It never crossed my mind that that this would never be allowed.

Eric N. whom I ended up being great friends with.

We met in Grade 4 and went all the way through high school together. We decided in our very mature high school years that if we had just dated in Grade 4 like we wanted to, we probably would’ve been together forever.

My best friend had a crush on his best friend, so obviously sleepovers were spent planning our co-wedding.

I think it was with my neighbour, Nick, when I was 9. Clearly, it was very memorable.

We were in my basement and I think my mom heard us talking about what was his originally his idea.  She was super not impressed!

Oddly enough, it was at our Guys and Dolls cast party in high school!

It was rough. The girl who played Sarah Brown back then made sure I got home okay.

I feel very lucky to be a woman and think it’s pretty wonderful.

Though my friends and I are strong, smart and wise enough, there can still sometimes be pressure to ‘be’ or ‘look’ a certain way.

I thought that I’d be able to speak five languages easily.

I never kept up with that goal and at this point I think it would be hard to learn!

What is the best advice a parent ever gave you?

My mom has always encouraged me to forge headlong into opportunities with a ‘Go do it!’ spirit.

She made me feel like I can do anything.  I guess it’s the right attitude if it feels right and you’ll figure out the rest later.

Quit learning to play a musical instrument after I’ve started.

I took piano and trombone lessons and played at school but then stopped. I so with I knew how to jam now!

It wasn’t so much a lie but I once denied truth to get into a show.

In one particular audition, women had to be at least 5’7” for the part.  They politely requested that everyone under that height leave the room.

I wasn’t too far off so I stayed!  I ended up being the shortest girl in the musical.

I was 20 and working on a cruise ship. I had severe stomach pain one day and the ship doctor thought my appendix was about to burst so they dropped me off by myself in a little town in Greece.

I was sent to a “hospital” in someone’s house and hooked up to a bunch of machines. They sent me to Athens the next day on a cargo ship to go to a real hospital!

It was very scary but I turned out to be totally okay.

You’ve been exiled to an isolated island with no other inhabitants but permitted to to bring one book, one CD, and one DVD what will this list include?

Book: I would ‘She’s Come Undone’ for a re-read.

CD: Mumford and Sons (any)

If a movie was made about your life, whom would you want to play the highly sought after Alexandra Herzog?

Aside from myself, it would want Robin Wright or Julia Roberts in the role.